Will be involved in active politics: Sasikala 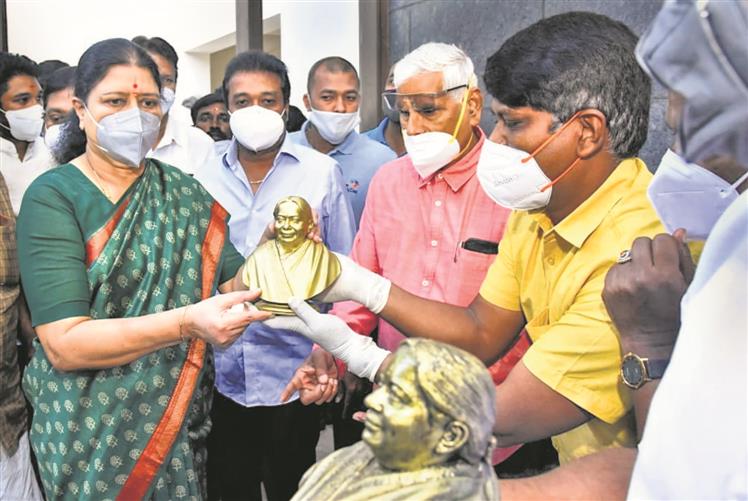 VK Sasikala being felicitated on her return, after serving a jail term, in Krishnagiri. PTI

Expelled All India Anna Dravida Munnetra Kazhagam (AIADMK) leader VK Sasikala on Monday said she would involve herself in active politics following her return to Tamil Nadu after completing a four-year prison term in Bengaluru in a corruption case.

I am bound by love, to the Tamil ethos and the principles I have embarked upon. But I can never be enslaved by oppression — VK Sasikala, Expelled AIADMK leader

In her first comments days after being discharged from a hospital in the Karnataka capital where she was treated for Covid-19, Sasikala said she was indebted to the people of Tamil Nadu, but asserted she would not be cowed down by “oppression”.

Asked if she would visit the AIADMK headquarters in Chennai, she said, “Please wait and see.”

“Sure, for party workers,” was her response when reporters asked if she would engage in active politics, months ahead of the scheduled Assembly polls in the state. She was on her way to Chennai from Bengaluru and briefly addressed supporters here. “I am bound by love, to the Tamil ethos and the principles I have embarked upon. But I can never be enslaved by oppression,” she told her loyalists.

Earlier, she returned to Tamil Nadu to a grand reception, days after completing her jail term in Bengaluru in the Rs 66.6 crore disproportionate assets case, amid indications of a confrontation with the ruling party which she once controlled. On the AIADMK filing police complaint against her, she said, “I think it shows their apprehension.”