Will get back territories from India: Nepal PM 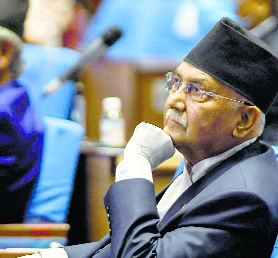 Amid efforts to restore normalcy in bilateral ties that soured over a bitter border row, Nepal’s Prime Minister KP Sharma Oli said on Sunday that he would get back the territories of Kalapani, Limpiyadhura and Lipulekh from India.

Oli’s remarks during hid address to the National Assembly (Upper house) comes just days ahead of the Nepalese Foreign Minister’s visit to New Delhi on January 14 — the seniormost political leader from Nepal to visit India after the strain in ties.

“Kalapani, Limpiyadhura and Lipulekh, located east of the Mahakali River, belong to Nepal as per the Sugauli Treaty. We will get these back through diplomatic talks with India,” Oli said. “Our Foreign Minister will visit India on January 14 during which his discussion will be centred on the map issue,” he said. After Nepal released the map last year, India reacted sharply, calling it a “unilateral act”.

Oli had earlier claimed that efforts were being made to oust him after his government redrew the country’s political map by incorporating three strategically key Indian territories. — PTI