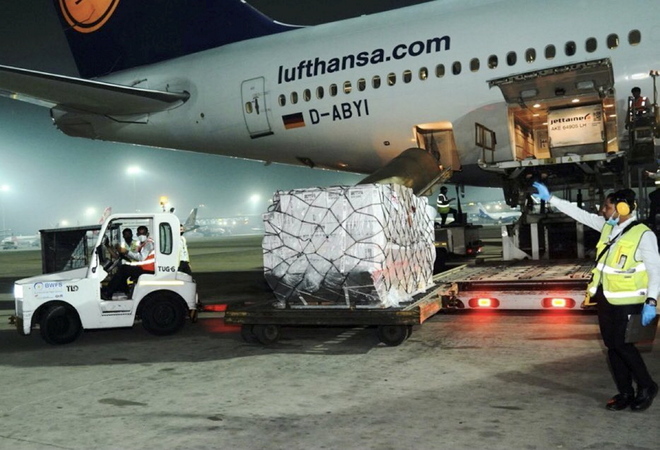 Medical supplies from the United Kingdom reach the Delhi airport on Tuesday. PTI

The world, from nations to concerned citizens to MNCs, has rushed to help India combat a devastating second wave of Covid sweeping the nation.

While the government is negotiating larger packages with the US, Russia and China, supplies of the badly needed oxygen, ventilators and therapeutic equipment have begun landing at the airports here.

Bhutan too will supply liquid oxygen from a joint venture with an Assam-based Indian firm. France would send relief material in two phases. Eight large oxygen generating plants will arrive this week while more liquid oxygen containers will be dispatched next week.

Kathmandu: The Indian Embassy here on Tuesday advised its citizens to avoid travelling to Nepal for the purposes of onward journeys to third countries after Kathmandu banned all foreign nationals from using the Himalayan nation as a transit point as part of its effort to combat the surge in the Covid cases. PTI

New Delhi: The Air India on Tuesday said one of its flights from Sydney had to return with just cargo as the Australian authorities refused to let it take passengers after one of its crew members tested positive for Covid-19. Meanwhile, Australia on Tuesday banned all flights to and from India till May 15. TNS

In a show of solidarity, the CEOs of some 40 top US firms have come together to create a task force to mobilise resources to help India fight the battle against Covid-19. The task force during its meeting on Monday decided to send 20,000 oxygen concentrators to India in the next few weeks, said Deloitte CEO Punit Renjen, who hails from Rohtak. pti