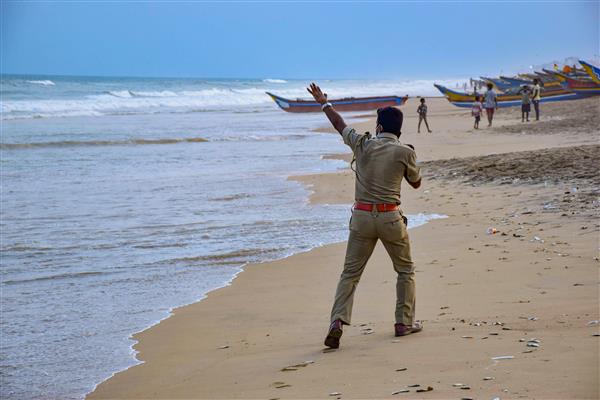 A policeman gives weather warnings over a microphone at a beach in Puri, Odisha, on May 22, 2021. Cyclone Yaas is likely to intensify into a very severe cyclonic storm and cross the Odisha and the West Bengal coasts on May 26. PTI photo

Cyclone 'Yaas' will cross the North Odisha—the West Bengal coast between Paradip and Sargar islands— by May 26 evening as a "very severe cyclonic storm", said the IMD on Sunday.

According to the weather department, the satellite imageries and Ocean Buoy Observations indicated that the "Low-Pressure Area" on Saturday became well-marked over the east-central Bay of Bengal has concentrated into a "Depression".

The "Depression" is likely to move north-northwestwards and intensify into a "Cyclonic Storm" on Monday morning, and subsequently into a "very severe cyclonic storm" in the next 24 hours. This will continue to move north-northwestwards, intensify further, and reach the northwest Bay of Bengal, West Bengal, and north Odisha coasts by May 26 morning.

The state government, as well as, the centre are preparing for the cyclone which would bring winds with a speed ranging 155-165 kmph.

Prime Minister Narendra Modi on Sunday called for a "timely evacuation of those involved in offshore activities" during a high-level meeting.

The IMD stated, that "Yaas" would make landfall with the wind 155- 165 kmph—gusting to 185 kmph. This is likely to cause heavy rainfall in coastal districts of West Bengal and north Odisha.

The IMD warned of a storm surge of about 2-4 m in coastal areas of West Bengal and Odisha. So far, it indicated that "Yaas" may not build up to the intensity of "Amphan" which has assumed the shape of a "Super Cyclone" around the same time, last year.