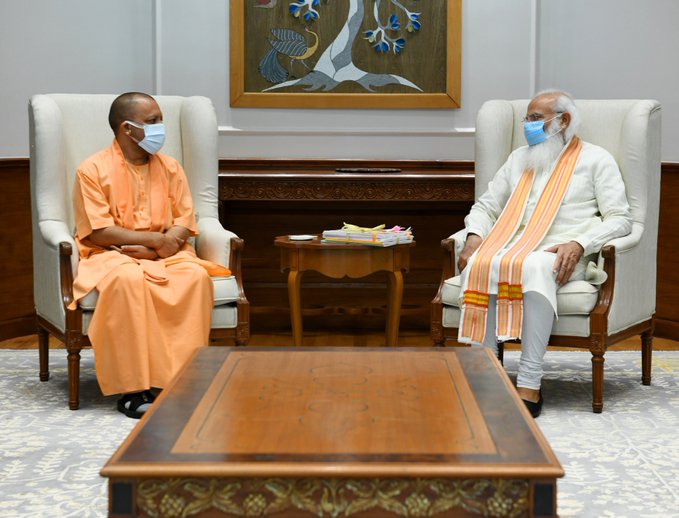 A day after meeting Home Minister Amit Shah, Uttar Pradesh Chief Minister Yogi Adityanath called on Prime Minister Narendra Modi and BJP president JP Nadda on Friday amid the prevailing buzz around “dissent” in the state BJP and the possibility of a Cabinet rejig “soon” to balance the crucial caste equations in the poll-bound state.

Later, Prime Minister Modi held a separate meeting with Shah and Nadda, say sources, adding that a decision on the induction of new faces, including from NDA allies in the state Apna Dal and Nishad Party, in the Adityanath Cabinet, can be expected “soon”. Sources say Jitin Prasada, a former Congress leader from UP who recently marked a high-profile entry into the saffron party, had called on Adityanath last evening. The buzz also is that PM may also induct some leaders from poll-bound states, including UP, in his Cabinet to give a leg-up to party's prospects.

Though leaders close to Adityanath insisted these were normal meetings to discuss “the current situation in the state, including future course of management of the Covid-19, and upcoming elections”, sources say important decisions were taken in the string of meetings over these two days. This was also the first time Adityanath met the PM, Shah, and Nadda in person since political turmoil hit the state BJP along with the second wave of the Covid-19.

Apart from reports of “differences” between Adityanath and the PM over the induction of former Gujarat-cadre IAS officer Arvind Kumar Sharma in the UP Cabinet, the CM’s detractors claimed “other issues” as well. Apparently, the central leadership is also upset over the way UP’s high-profile Chief Minister has been managing the party affairs in the state and doing public outreach “without giving due prominence to the PM”. Interestingly, much was also read over why the PM did not wish Adityanath publicly on his birthday a couple of days back.

The sources claim the discussion revolved around prevailing anger among people and state leaders over Covid “mismanagement” in the second wave, ways to make amends ahead of Assembly polls and the cabinet expansion/reshuffle. BJP’s performance in recent panchayat polls was also discussed along with "disgruntlement" in the state leadership.

One of the key messages for Adityanath, they said, is to “be prepared for the third wave of Covid-19. If the situation is managed well in case that happens, the BJP will win UP”. Apart from giving more prominence to the upset Brahmin community, another message is to build a solid caste matrix with NDA allies.

Last evening Apna Dal leader, Anupriya Patel had also met Shah. A minister of state in the first Modi government, Anupriya is looking for a ministerial berth for herself in the Centre and a berth for her husband Ashish Patel in the state. Sources say two leaders of the Nishad Party, Sanjay Nishad and Praveen Nishad—an MP from Sant Kabir Nagar—also want a similar settlement.

Apart from accusations of “mismanagement” and the anti-incumbency factor, Adityanath is also facing allegations of “favouring” the Thakur community at the cost of Brahmins. This despite the presence of several "upper caste leaders”, including Deputy CM Dinesh Sharma and Power Minister Srikant Sharma, in his Cabinet". AK Sharma and Prasada are believed to be part of the re-boot plan to further boost the party's prospects in the state.

Many state leaders have been openly critical of Adityanath over “mishandling” of the second wave of the Covid pandemic and have also voiced concern to the top leadership over the impact people’s anger may have on polls next year.

—Get battle-ready for UP by taking along everyone

—Be prepared for the third wave of Covid-19

—If the situation is managed well, the BJP will win UP