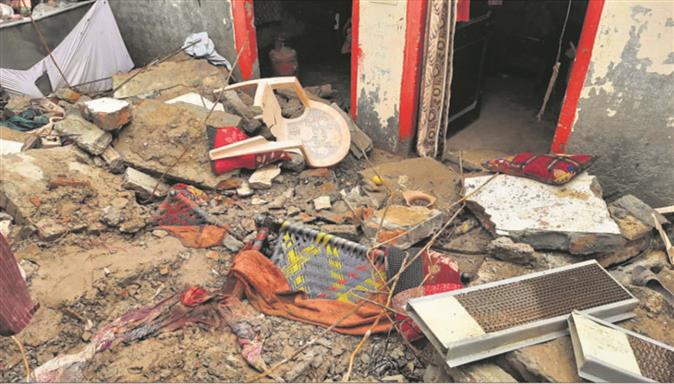 Four members of a family, including three children, were killed at Matoli village when the roof of their house collapsed. file photo

A roof collapse killed four members of a family, including Mukhtiar Singh (40) and his three children Vanshdeep Singh (14), Simranjit Kaur (13) and Kamaldeep Kaur (10), on Monday night.

Two women in the house, including Mukhtiar’s mother Amarjit Kaur and his wife Surinder Kaur, are left to mourn their sons and daughters.

Surinder Kaur suffered injuries on her legs and chest in the incident.

Though the grief-stricken family could not be contacted, village Sarpanch Ranjit Singh while talking to The Tribune on the phone said Mukhtiar used to do odd jobs in the village. He worked in fields and at market place to earn bread for his family, sarpanch added. The whole family was wiped out and only Mukhtiar’s mother and wife survived in the incident, said sarpanch.

Mukhtiar Singh had two brothers, who lived in separate houses in the same village, sarpanch added.

“The family and other villagers rushed to Mukhtiar’s house when we heard a loud thud on Monday night. We could not save them,” said another villager.

The government had announced compensation for the kin of the deceased and they were would be given free treatment, sarpanch added.

The SDM visited kin of the deceased and assured them that the government would provide them Rs16 lakh (Rs4 lakh per deceased), said sarpanch. They would be given treatment on the government expenses, sarpanch added. Mukhtiar’s mother would also be given compensation for reconstructing the collapsed house, said sarpanch.

“Only two women are left in the house after the incident. Sometimes Mukhtiar’s mother used to come and live with him. The two are left to mourn their sons and daughters,” said villagers.

Surinder Kaur was brought to the Government Rajindra Hospital today morning, but was discharged soon after conducting X-ray and tests, villagers added.

The last rites of the deceased family members were performed today afternoon.