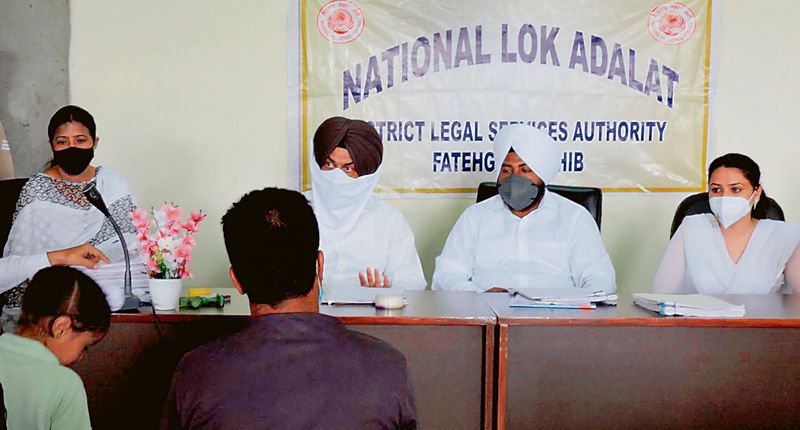 Rajinder Aggarwal, District and Sessions Judge, Patiala, said a total of 24 Benches were set up at the district courts of Patiala, Nabha, Samana and Rajpura on Saturday as part of National Lok Adalat. The courts have been working consistently with the help of lawyers to resolve the cases pending due to Covid restrictions, he stated.

Chief Judicial Magistrate (CJM) Parminder Kaur, Secretary, District Legal Services Authority (DLSA), said the Lok Adalat remained successful as over 4,000 cases, out of the 6,600 taken up for hearing, were resolved.

Earlier, Justice UU Lalit, Supreme Court Judge and Chairman of the National Legal Services Authority, reviewed the National Lok Adalat through video-conferencing. He lauded the efforts made by the bench of Additional District and Sessions Judge Shiv Mohan Garg to settle a criminal dispute amicably during the Lok Adalat.

A National Lok Adalat was held at sessions court division Fatehgarh Sahib and sub-division Amloh and Khamanon to ensure speedy and hassle-free dispensation of justice, under the guidance of Nirbhow Singh Gill, District and Sessions Judge-cum-Chairman, District Legal Services Authority (DLSA). Ten Benches were constituted to facilitate the litigants.

Gill said a 20-year-old civil dispute was settled and four estranged couples were reunited with the efforts of the members of the Lok Adalat. Approximately 1,200 cases of the 1,437 presented were settled in the Adalat. An amount of Rs 1.18 crore was awarded as compensation.