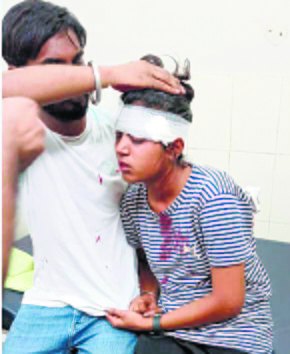 A student who was injured in the clash at Punjabi University in Patiala. file photo

The police have registered a case against 12 identified and 50 unidentified persons for Saturday’s violence on the Punjabi University campus. Those already arrested include an employee, Rajinder Singh Raju; Ashu, a relative of another employee of the university, and Dharminder. The three will now be produced before the court on Monday.

Students of various organisations have decided to raise a number of demands with the university authorities, including a ban on vehicles of non-teaching and teaching faculty members.

Six students, including two girls, were injured in the clash near the library. Those injured include PhD scholars Varinder Khurana and Gurshinder Singh, and masters students Pardeep Kaur, Ramandeep Kaur, Amolak Singh and Kulwant Singh. Students said Amolak suffered an injury above his eye while Ramandeep had swelling on her neck. They are undergoing treatment at the Government Rajindra Hospital.

Meanwhile, Rajinder Singh Raju, former president of Class B and C Employees Association, said he and another person were also injured. He said: “I and Ashu, brother of another employee, were injured. We had to get admitted to the hospital after the students attacked us.”

“Four-wheelers of students were banned on the campus years ago due to ruckus. Now vehicles of university employees are involved in the same unruly manner. We want that the university authorities should ban all vehicles of employees as well,” said Sandeep Kaur, a student leader of the Punjab Radical Student Union (PRSU), while talking to The Tribune.

The police said they had registered a case under sections 354 (assault or use criminal force on any woman), 354-A (sexual harassment), 324 (voluntarily causing hurt by dangerous weapons), 506 (criminal intimidation), 147 (rioting) and 149 (every member of unlawful assembly guilty of offence committed in prosecution of common object) of the IPC against 12 identified and 40-50 unidentified persons.

Urban Estate SHO Ronnei Singh said: “University employee Rajinder Singh Raju and two persons named in the FIR, Ashu and Dharminder, have been arrested. They will be produced before a court tomorrow.”