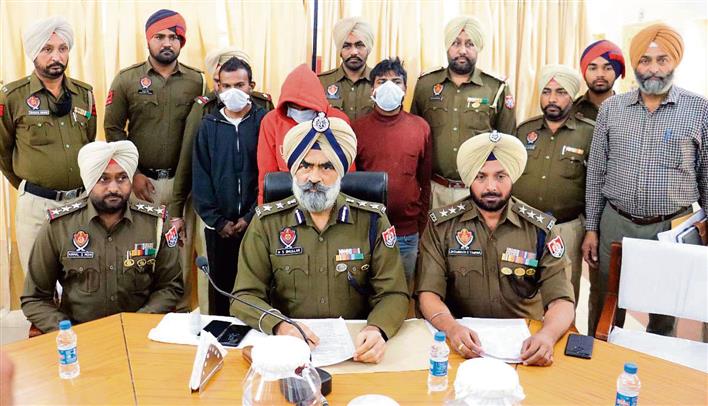 SSP HS Bhullar addresses a press conference regarding the arrest of the suspects in Patiala on Thursday. Rajesh Sachar

The police here on Thursday said they had managed to nab three members of a gang involved in looting incidents at petrol pumps. The accused were arrested along with weapons after which a case was registered against them.

The Senior Superitendent of Police (SSP), Patiala, HS Bhullar, said three unidentified persons carrying sharp weapons had looted cash from two petrol pumps in Shambhu and Rajpura on the intervening night of November 18 and 19. The police had registered cases at the respective police stations in this connection, the SSP added.

The police stopped a Dzire car at a check-post in Mehmadpur village on November 20, the SSP said. “Four occupants of the car managed to flee form the spot. Later, during another checking drive at the village on November 24, the police party nabbed three accused identified as Bahadur Singh and Ravinder Singh of Shambhu in Patiala and Amandeep Singh of Banur,” the SSP added.

During interrogation the accused confessed that they had looted cash from petrol pumps, along with their accomplice Ranjit Singh of Sidhuwal village in Patiala, who was then named in the FIR, the SSP said.

“The police have recovered two vehicles, a pistol, cash and other sharp weapons from their possession,” the SSP added.

“The police have also found that the accused snatched vehicles in various areas of Punjab and Haryana. They will now be presented in a court,” the SSP said.