4 of family killed in roof collapse in Patran 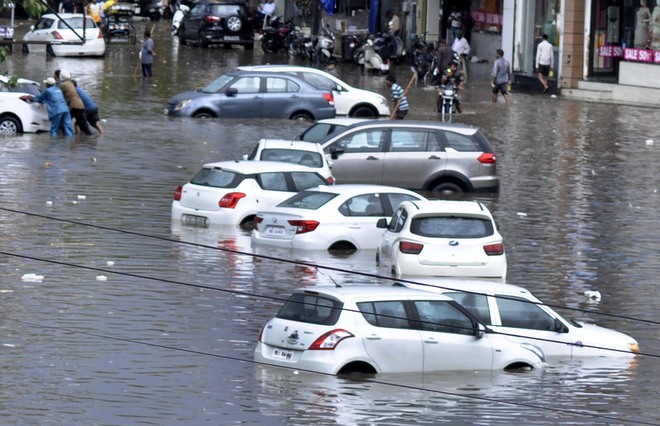 Cars stuck on a waterlogged road in Patiala on Tuesday. Photo: Rajesh Sachar

Four members of a family, including three children, were killed at Matoli village of Patran when a roof of a house suddenly collapsed on Monday night.

His wife Surinder Kaur is admitted to a hospital and undergoing treatment. People said the roof of the house collapsed after it rained during the day. Shutrana SHO Shamsher Singh said, “The house was constructed in the early 90s. As such it did not have any major problem. As per preliminary findings, the walls of the house shifted due to which the roof came plummeting down.”

He said the police reached the site to evacuate those buried under the debris where the woman was pulled out and admitted to a hospital. The kids’ grandmother and a family member, who were sleeping in another room, are safe.

Meanwhile, a flood-like situation prevailed in Patiala, the hometown of Chief Minister Capt Amarinder Singh, on Tuesday as rain lashed the city. Water entered houses of residents at Lehal Colony, near Kadah Wala Chowk, Preet Nagar and other areas.

Mayor Sanjeev Kumar Sharma blamed the haphazard development of colonies in and adjoining areas of the city in the past 70 years, lack of stormwater system and presence of dairies for the problem.