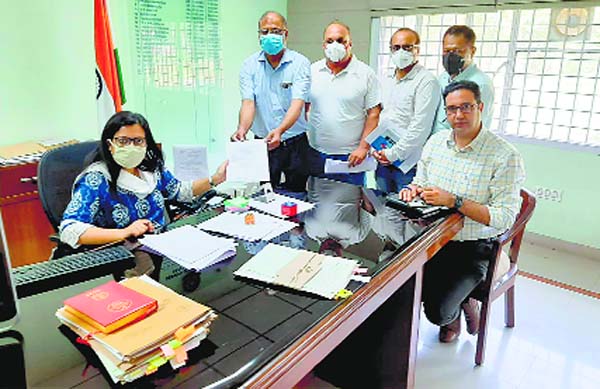 Doctors give a memorandum regarding their demands to the Deputy Commissioner in Fatehgarh Sahib. Tribune photo

Doctors from various Civil Hospitals and veterinary, dental, ayurvedic and rural medical officers marched from the Civil Hospital, Fatehgarh Sahib, to Deputy Commissioner’s office and raised slogans against the state government in support of their demands.

Addressing mediapersons Dr Satnam Banga said, “It’s unfortunate that the Sixth Pay Commission not only decreased the non-practice allowance (NPA) from 25 per cent to 20 per cent, but also de-linked it from basic pay salary.”

“Government doctors have worked as frontline warriors during the pandemic. Now, the government is going to reward them in this manner instead of giving special allowance,” he added.

Doctors submitted a memorandum to Fatehgarh Sahib Deputy Commissioner Surbhi Malik demanding that the NPA should be increased to 33 per cent and linked with the basic pay and the pension should be fixed on these criteria. Doctors, who worked as frontline warriors, should be given special allowance, they added.