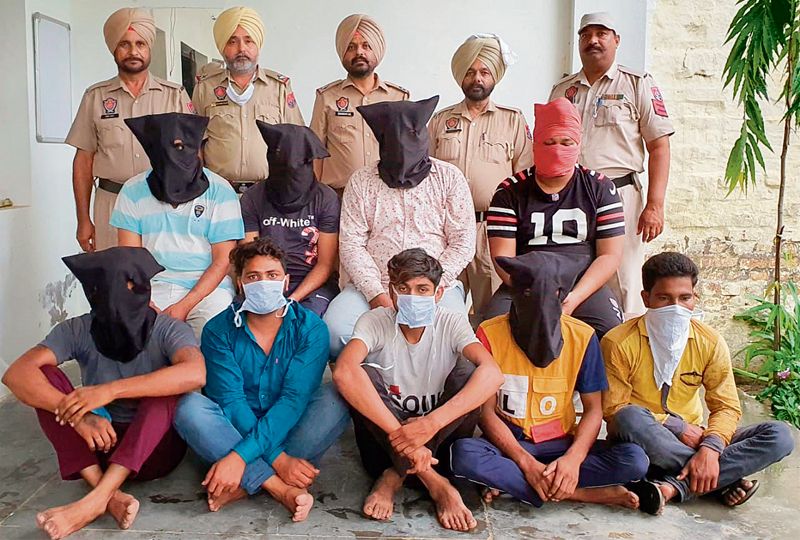 The suspects in the custody of the Patiala police on Thursday. photo: Rajesh Sachar

The district police have nabbed nine persons of a gang accused of looting a truck loaded with iron rods on the Patiala-Samana road. Superintendent of Police (Investigations) Dr Mehtab Singh said that Ramesh Kumar, the kingpin of the gang, was also involved in another loot case registered against him at the Passiana police station.

The other arrested accused have been identified as Billu Ram of Fatehgarh Sahib, Babbu Khan of Lakkar Mandi in Patiala, Abdul of Moradabad, Davinder Singh of Sanour, Sukhwinder Singh of Sanour, Gulzar Ali of Amroiya in UP, Rajpal of Fatehgarh Sahib, Faizal of Sanouri Adda, Patiala, and Ravi Kumar also of Sanour here. The police said two of their accomplices, identified as Ramesh Kumar and Goldy Ram, were yet to be arrested.

The SP said the miscreants thrashed truck driver Surinder and snatched the vehicle on September 21. A case was registered under Sections 324, 307 and 395 of the Indian Penal Code (IPC) at the Passiana police station. “We have arrested nine persons and recovered two vehicles, including an Innova and a Beat car, used in the crime along with 16 tonnes of looted iron rods,” he said.