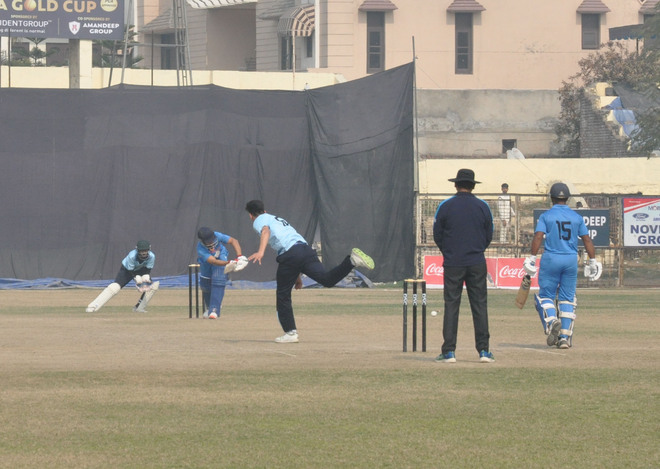 A cricket match in progress at Gandhi Ground in Amritsar on Wednesday. Photo: Sunil Kumar

Hosts Amritsar along with Patiala booked their semifinals berth on the fifth day of the AGA Gold Cup U-19 cricket tournament on Wednesday.

After winning the toss at the Gandhi Ground, Majha Heroes chose to bat first. However, the team caved in earlier than expected as they were bowled out in 26.5 overs for 85. In reply, Patiala made got the job done by scoring 87 runs in 22.1 over’s for the loss of three wickets. Patiala’s Aryaman was adjudged the ‘Man of the Match” for his five scalps in seven overs.

The 10th match of the tournament was played at the Amandeep Cricket Ground between Amritsar and Malwa Heroes. Winning the toss, hosts decided to go with the bat and scored an impressive 285 giving away six wickets in 40 overs.

Sports lovers and enthusiasts are happy for declaring forthcoming National Sports Day in memory of late hockey legend Balbir Singh Senior. Gurinder Singh Mattoo, president, Sarhad-e-Punjab Sports Club, which has been promoting various sports in the district for the last 18 years, said representative hockey matches will be held in every district of the state.

He claimed that the government took the decision after members of the club, led by chief patron Harmanbir Singh Gill, had forwarded a letter in this regard to Chief Minister Capt Amarinder Singh and Director Sports on June 10, demanding that hockey Olympian Balbir Singh Sr (Padma Shri and Arjuna awardee), who passed away on May 25 last year, should be remembered for posterity. Mattoo said the government accepted the demand and the National Sports Day on August 29 will be observed in memory of Balbir Singh Sr.