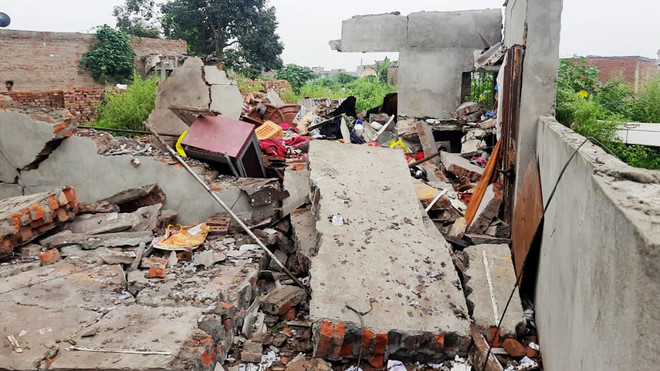 The debris after a blast at an illegal cracker unit in Rajpura.

The count of deaths in Saturday’s blast in a house at Rajpura reached two with the death of the brother of the girl who was killed yesterday. With this, Rajpura is back in focus as an illegal cracker hub.

On Saturday, 13-year-old girl Manpreet Kaur was killed and three others — aged six, eight and 14 years — were severely injured in a blast inside a house at Jhandoli village. Late night, victim’s brother Gurpreet Singh (14) succumbed to the injuries.

According to the police, a cracker manufacturing unit was being run illegally from the house. The roof of the house was blown apart in the blast.

The blast at the illegal cracker unit being run from the house of Krishan Kumar — father of the injured children — has sent shock waves across Patiala district. Illegal production of crackers continues unabated in the district with Rajpura emerging as a hub.

Crackers were being manufactured, stored and sold without regulation. Fire officials said they had not given permission to produce or store crackers.

In 2017, a person died and three others were injured in a blast at a cracker unit in the Mirch Mandi area of Rajpura. A week before Diwali in 2017, a 13-year-old girl had lost her life while making crackers in another factory. A shop in Balbera had also caught fire in 2017 leading to loss of lakhs of rupees.

“The cracker business picks up pace after the rainy season. Crackers are mostly brought from outside and stored in the town. We will carry out raids at unregulated shops,” said an official.