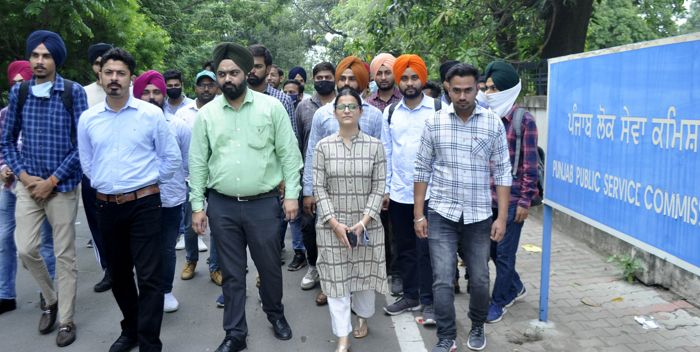 Applicants from various districts of Punjab outside the PPSC office in Patiala. Rajesh Sachar

Applicants said they had applied for various posts, including that of junior engineer (JE), SDO and Naib Tehsildar, but till date only exam for the recruitment of SDO was held.

Lovejeet Singh, one of the protesters said, “Posts of Naib Tehsildar were notified in 2020. But its exam has not been conducted till date. Similarly, exam for the posts of junior engineer in various departments have also not been conducted.”

“Earlier, the commission had notified a particular month for conducting various exams. We have been waiting for exams for the last over two years. This has caused much resentment among applicants,” he added.

Applicants had come to the PPSC office from Mansa, Amritsar, Abohar, Rajpura and other locations.

They said over 80,000 candidates had applied for the posts of Naib Tehsildar while thousands were preparing for junior engineer exam.

GDS Soni, who runs a training institute in Chandigarh, accompanied students. He said, “We met officials at the PPSC office, but they also said that exams will be held after the appointment of new chairman. The last chairman retired in July. The department is yet to hold interviews for the posts of junior engineer for which exams have already been conducted.”

“The exams for various posts were announced in 2020. The commission failed to conduct exams. This has left many applicants harassed as they have been preparing for exams for over two years. Also, before this, the exams for junior engineer posts were held in 2019,” said applicants.