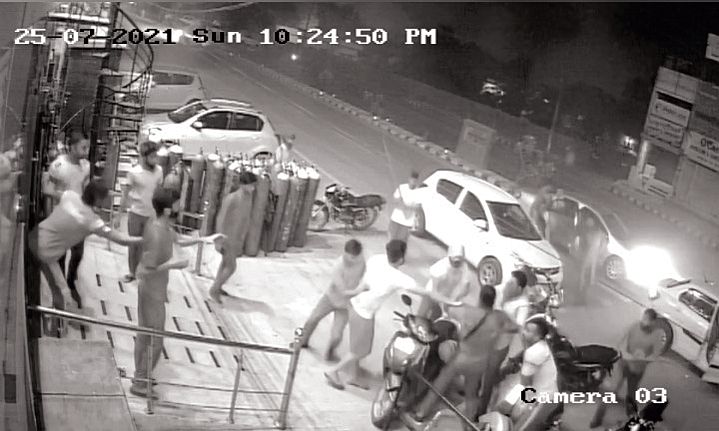 Every evening the Chief Minister’s home town turns into a paradise for booze lovers in the city with youngsters openly flouting all norms and drinking in their vehicles and eatery owners serving them in their cars. Worst is that despite recent brawls and lewd comments passed on women by booze lovers, the police have turned into a mute spectator.

Residents in the royal city complained that lack of policing in the evening was a cause of concern. “If this is the state of affairs in the Chief Minister’s home town and his own constituency, we need not say more. Speeding vehicles, many of them without numbers and black filming can be seen rashly driven in the evening,” they added.

Worst affected are markets opposite YPS, Polo Ground, behind the Chief Minister’s residence, near residence of the Deputy Commissioner, 22 number underbridge, near Old Tractor Market, behind AC Market and Urban Estate Market, where booze lovers turn the entire area into an open pub, sometimes even before sunset.

Vehicles can be seen parked outside popular eating joints and chicken shops in which occupants have drinks.

As The Tribune team visited a market opposite YPS in Chotti Bazaar, elderly residents blamed the police for not maintaining enough vigil to ensure no liquor consumption and rowdy behaviour by youngsters in the area.

“You can yourself see that despite the police post in the area and almost three cops on duty all youngsters are busy drinking in their cars parked opposite market,” claimed Hardeep Singh, a retired Army officer.

“They pass cheap comments. One of them even tried to throw a beer bottle on a woman carrying some shopping bags. The local police are nowhere to be seen nor there are any woman constables on duty in this market, which is one of the busiest,” he added.

The unhealthy practice of liquor consumption at public places, including city markets, residential colonies and parks, is increasing with each passing day. Residents face difficulty while stepping out of their houses in the evening.

“You can check any car near our market in the evening. People can be seen drinking in their vehicles and ordering snacks from inside,” claimed a resident, who lives near New Leela Bhawan.

“Every evening dozens of vehicles are seen parked opposite shops in the market or driven recklessly. There are almost 10 chicken shops near the 22 number underbridge. All of them serve snacks and other eatables to occupants of cars. They consume liquor and litter near our houses. The police are yet to initiate any action against them,” he added.

Sources say the police gets its cut per week from these shop owners and allows them to serve eatables to people, who consume liquor inside cars. “We are paying them weekly. It ensures that they do not raid our shops. In case there is a raid, cops on duty inform us in advance,” said few such shopkeepers behind AC Market and the one under 22 number overbridge. While SHO-level officials failed to conduct raids, senior officers have promised action against those consuming liquor at public places in the city.

The Patiala SSP, Sandeep Garg, said he would ask the SP (City), Varun Sharma, to initiate a drive and register FIRs against such offenders. “I will immediately issue instructions to all city police stations. All SHOs will be asked to patrol their area and take strict action against anyone found drinking in the public. We will not tolerate this. A complaint against anyone found drinking at a public place will be taken seriously,” the SSP warned.

In the past three days, brawls by drunken men in the city have left at least six persons injured, creating an atmosphere of fear among residents. In one of the brawls, a security guard at a bar was attacked, chased and attacked again with rods and a pistol. On Wednesday evening, a group of gangsters was involved in a brawl openly in the market. They were allegedly in an inebriated state. However, the police were late in reaching the spot. They reached the spot only after a 30-minute free-for-all street fight between the groups. In April, the body of an unidentified man was recovered from the basement of a closed restaurant.