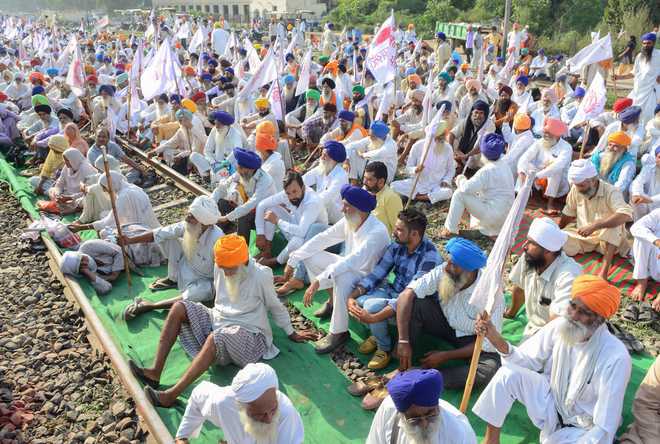 Intensifying their struggle against the three farm laws, farmer unions in the district have announced a ‘rail roko’ protest on February 18 as part of nationwide agitation. - File photo

Intensifying their struggle against the three farm laws, farmer unions in the district have announced a ‘rail roko’ protest on February 18 as part of nationwide agitation.

Members of the Samyukt Kisan Morcha (SKM), after a meeting, said they would stop trains at the Patiala railway station from 12 noon to 4 pm on February 18. The union members urged residents to come out in support of the “rail rook” protest.

Surinder Singh Khalsa, morcha member, said the Modi government was trying to disrupt the farmers’ movement. “The government is arresting innocent farmers in the name of the Republic Day incident. People must come out and protest such actions.”

Another leader, Davinder Punia, said the Centre was not just arresting farmers, but also people who were supporting them. “The attempts to end the agitation will not work,” he added.

Meanwhile, union members said they would celebrate the birth anniversary of late farmer leader Chhotu Ram at the Dhareri Jattan toll plaza on the Patiala-Chandigarh Highway on the day of protest. — TNS

Bathinda: The Dehati Mazdoor Sabha Punjab has pledged support to the ‘rail roko’ call. Mithu Singh Ghudda, president of the district unit, said: “We have also decided to gherao ministers and MLAs of the state in the first week of March.”