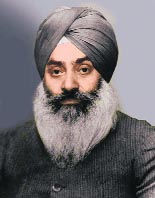 On the 66th death anniversary of Col Raghbir Singh, former Chief Minister (CM) of the PEPSU state, his son Karanbir Singh Sandhu announced that his father’s biography would be released soon.

While paying tributes to his father Karanbir said Colonel Raghbir Singh born in Thethar village of Lahore in 1895 came from the lineage of Sardar Sahib Singh and Sardar Lakha Singh. The two were responsible for the early-upbringing and education in use of arms of then Maharaja Ranjit Singh of the Sikh empire.

Colonel Raghbir Singh was ushered into services in Patiala by Maharaja Bhupendra Singh where he went on to become the Inspector General of the police by 1926.

Colonel Raghbir Singh played a pivotal role in bringing about a compromise between the princely state and the Akali movement during the uprising of 1942. Soon after, he formed a separate political party Lok Sewak Sabha that later merged into the Congress. He then also became the home minister in the PEPSU state.

Colonel Raghbir Singh was elected as the leader of the Congress during the first General Elections of India and the PEPSU state in 1952. He took an oath as the first Chief Minister of the PEPSU, but had to resign as Akalis gained power with the help of independent candidates. He again became the CM of the state in 1954 as Congress gained power with a thumping majority. His stint as the CM lasted less than a year, but he worked for the co-operative movement in the state and other matters. He later inaugurated the first co-operative bank in Patiala. He also encouraged small and medium industries in Rajpura and started the PEPSU Roadways.