Campaigning in top gear at Patiala 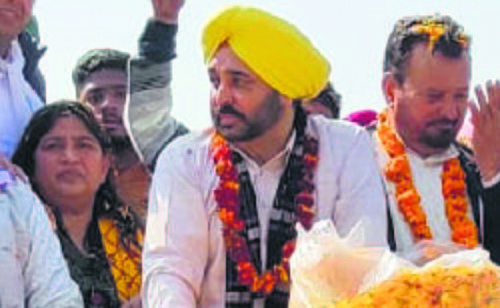 Campaigning for the Municipal Council elections is in full swing in the Chief Minister’s home district of Patiala.

A total of 438 candidates are in the fray in Nabha, Rajpura, Samana and Patran. One Congress-backed candidate and the incumbent president of the council in Nabha subdivision has won the election unopposed.

During his campaign in favour of AAP candidates in Rajpura and Nabha, Mann appealed to the people to cast their vote for the party’s candidates. He said: “The local bodies’ elections were the foundation of a democracy. For the development of the city, it was important to elect honest and qualified representatives. Mann said people had an opportunity to get rid of ‘corruption’ from their areas by casting their vote of the AAP candidates.”

Meanwhile, Preneet Kaur, while campaigning in Rajpura, said the state government had reserved 50 per cent of the seats for women who understand the people’s issues well. The Centre’s ‘ignorance’ towards farmers’ demands is against the spirit of a democracy.