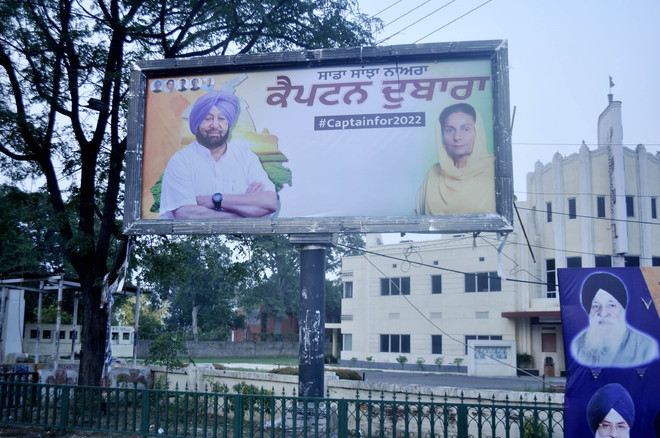 Amid political crisis in the state Congress, a poster war has erupted to claim supremacy. In the latest development, posters in favour of Punjab CM Capt Amarinder Singh have emerged in parts of Amritsar. On the other hand, Navjot Singh Sidhu’s posters were spotted in Capt Amarinder’s home turf Patiala.

These hoardings were spotted on the main Bhandari Bridge, Crystal Chowk, bus stand and in other parts of the holy city. “It is just a gesture of the local Congress workers expressing their feelings for Capt Amarinder Singh,” said the Mayor. It is learnt that identical hoardings favouring Capt Amarinder were spotted in Patiala too.

In Patiala, the posters depicted that the entire Punjab was with Sidhu. The posters termed him as the ‘voice of farmers’ who stood against the 2015 sacrilege of Guru Granth Sahib with titles like ‘Sara Punjab Sidhu De Naal’, ‘Kisaana Di Awaaz Mangda hai Punjab Guru Di Beadbi Da Hisab’.