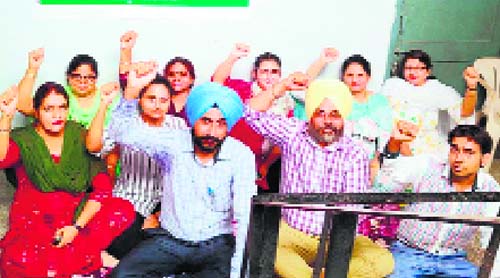 Child Development Project Officers (CDPOs) have been holding a pen-down strike for the past one week against the Punjab Government’s 6th Pay Commission report, affecting the enrolment of beneficiaries for various social security and Child & Women Development schemes, including pensions, in the state.

The protesting CDPOs said until their demands were met, the enrolment would remain suspended.

They said it was a great injustice to them as the Pay Commission had downgraded their pay scale from 15 to 13.

The protesters highlighted that the CDPOs in neighbouring Rajasthan were being paid on a pay scale of 18, while those in Bihar were remunerated on a scale of 17.

Kanwar Shakti Bangar, president, CDPOs Democratic Association, said: “Given the extra work we are doing, the Pay Commission report is very demoralising. Our post is equivalent to the BDPO since its creation in 1975. However, except the 4th Pay Commission, the state government has not treated both posts on a par.”

The officers had met Cabinet minister Aruna Chaudhary, who holds the portfolio of Social Security, Women & Child Development, to press for their demands.

Bangar demanded that their pay matrix level should be raised to 17 which was equivalent to 5,400 pay grade.

The protesters said it was a great injustice to them as the Sixth Pay Commission had downgraded their pay scale from 15 to 13.