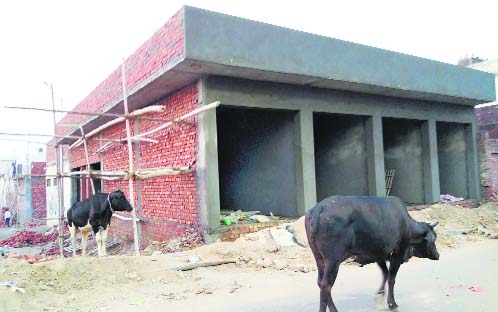 Illegal construction of shops in progress near Sanauri Adda in Patiala on Monday. Tribune photo

Construction of many shops near Sanauri Adda in the city continues despite demolition orders issued by the Municipal Corporation Commissioner. Illegal construction continues in the city while residents grapple with Covid pandemic.

As many as four shops have been constructed. Ground has been dug up for starting work of more shops adjacent to them.

As a matter of fact, the Municipal Corporation (MC) had constructed a Sabzi Mandi near Sanauri Adda recently. All vegetable vendors from Old Sabzi Mandi were shifted to the new site from the Ragho Majra area. As such illegal construction near the site, which is already receiving footfall, has started.

Meanwhile, when contacted, MC Commissioner Poonamdeep Kaur said, “The matter has come to our notice. A notice was issued after which department officials put-up file regarding the matter. I ordered demolition of shops few days ago.”

Twitter India MD questioned by Delhi Police on May 31 in 'toolkit' case: Officials