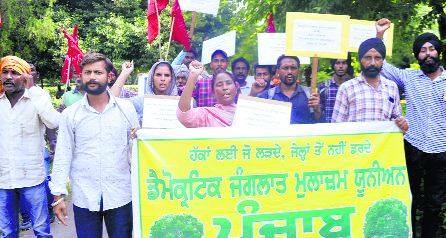 The honorarium and contractual workers from various departments took out a protest march in support of their demand for regularisation, here today.

The protesters marched towards the residence of Cabinet Minister Brahm Mohindra, but were stopped at the Fountain Chowk.

They were later offered a meeting with the Chief Minister’s Principal Secretary Husan Lal on October 18.

The workers held a protest at the Baradari Gardens before advancing to the minister’s residence.

The protesters sought regularisation along with implementation of minimum wages for those working on an honorarium.

The protesters said similar marches were organised in Amritsar, Muktsar and Jalandhar today.

They warned that if their demands were not met, they would organise a state-level rally at CM Charanjit Singh Channi’s home town Morinda and gherao his residence.