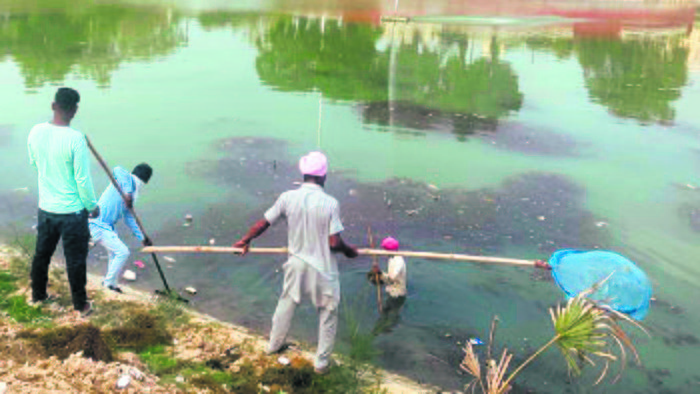 A day after dead fish were found in the recently rejuvenated Rajindra Lake here, the district administration today started cleaning the lake.

The dead fish are said to have been taken out and the Irrigation Department has added dissolved lime into the lake. The lime was mixed after the Fisheries Department directed to increase the dissolved oxygen level in the lake.

Pawan Kumar, Deputy Director, Fisheries Department, said fish might have come along with the water supplied from the Bhakra main line canal. He said, “Due to the ongoing breeding season, there has been an increase in the number of the fish. However, there is low concentration of dissolved oxygen level in the lake water, owing to humid weather conditions. This seems to be the probable cause of death of fish.”

Sources in the department said the dead fish were of only one species. The sources added that fish were found dead only on one side of the lake, which indicated that there were chances of contaminated external feeding.

Davinder Singh, Chief Engineer, Drainage Department, said fresh water was added to the lake. “Dead fish have already been removed from the lake. Fountains are being run to provide aeration to the lake. It will also help in getting rid of the foul smell near the lake,” he added. — TNS