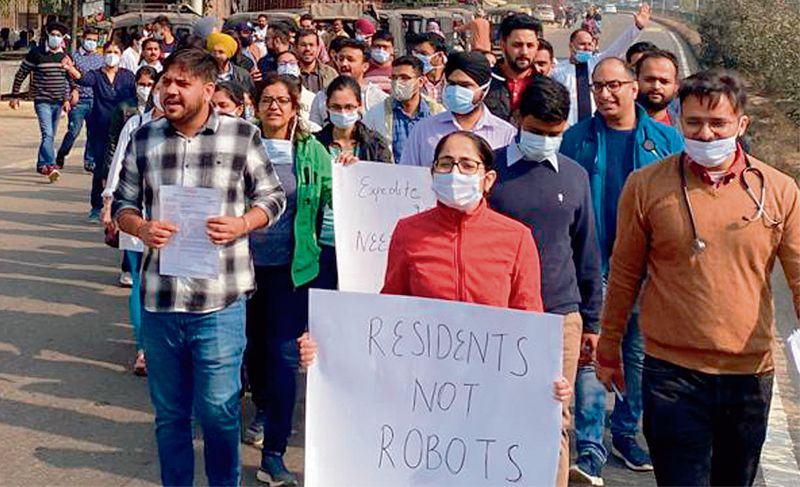 To protest the “delay” in the NEET PG 2021 counselling, the resident doctors of Government Rajindra Hospital here today announced that they would not join the OPD duties for an indefinite period.

The resident doctors said owing to the delay in admissions they had been overburdened with the work.

They said excess work was taking a toll on their physical and mental health.

We have been performing both Covid and non-Covid duties for the past 1.5 years, they said.

The resident doctors also held a protest march and halted the OPD services. The protesters, however, said they would not let emergency services suffer because of their strike.

The protesting doctors also raised slogans against the Central Government for failing to complete the PG admission procedure. They later met the Medical Superintendent of the hospital and handed over a memorandum.

Notably, the NEET PG counselling was scheduled to begin on October 25 but the medical counselling committee (MCC) had postponed it following the Supreme Court’s directive.

The top court is said to be hearing a petition challenging the July 29 notification of the Centre and the MCC to provide 27 per cent reservation to the OBC and 10 per cent to the EWS students in the all India quota.

The Union of Resident Doctors of Punjab (URDP), who organised today’s protest, said they had been working overtime to compensate for the work of the first year residents who couldn’t join their duty due to delay in counselling.

Dr Prabhsimran Singh, general secretary, URDP, said: “The admission of PG students has been delayed by almost over six months. Consequently, second year residents have to do extra work to cover up for the first year residents.”

“We don’t get time to study for our own examination as we are busy with duties,” he said.

The Resident Doctors Association stated: “We urge the Central Government and the Supreme Court to take note of grievances of resident doctors and take necessary measures for expediting the NEET PG - 2021 counselling. In case there is no positive response from either side, we will be forced to escalate our protest.”