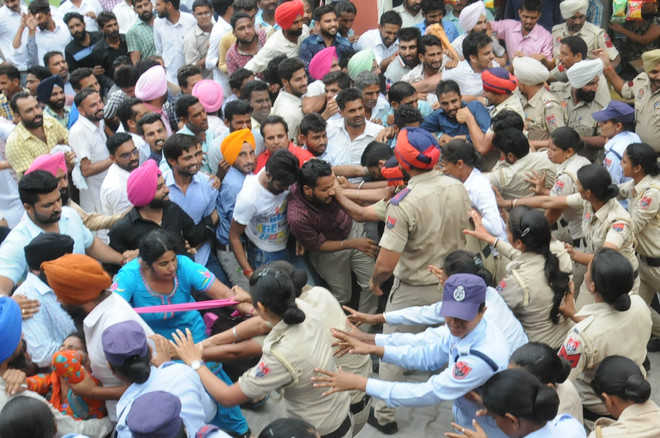 The Patiala Deputy Commissioner, Kumar Amit, today said the district administration was making all possible efforts to bring the two ETT/TET pass unemployed teachers, who were sitting atop the BSNL tower, down. - File photo

The Patiala Deputy Commissioner, Kumar Amit, today said the district administration was making all possible efforts to bring the two ETT/TET pass unemployed teachers, who were sitting atop the BSNL tower, down.

On behalf of the district administration, the Patiala SDM, Charanjit Singh, SP (Traffic) Palwinder Singh Cheema and DSP (City I) Yogesh Sharma were continuously in touch with both protesters sitting atop BSNL tower, the DC added.

“Our endeavour is to sort out their issue by taking up the matter with the Education Department and exploring other avenues for the safety of these people,” the Deputy Commissioner added.

The Deputy Commissioner, who was accompanied by SSP Vikramjeet Duggal, also visited the tower site and interacted with both protesters over phone. He appealed to them to get down from the tower in the larger interest of their families.

The Deputy Commissioner reiterated that the district administration was making strenuous efforts for their safety. The state government was sympathetically considering the matter and appropriate action would be taken on genuine demands of protesters within the legal framework, the Deputy Commissioner said.