Only 4,178 inoculated on Saturday, beneficiaries hesitant 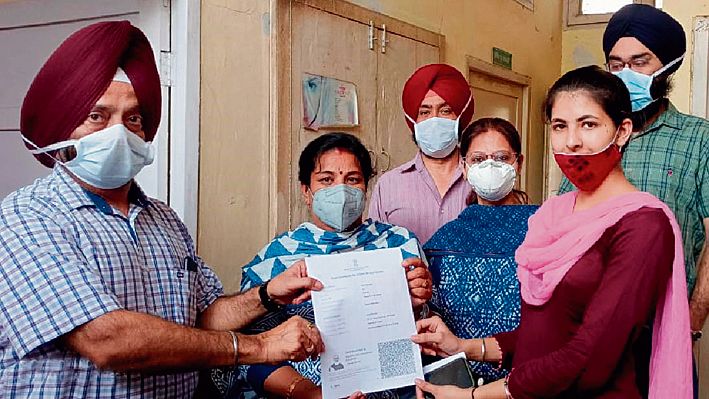 Civil Surgeon Satinder Singh gives a vaccination certificate to a beneficiary for international travel after she was administered the vaccine in Patiala on Saturday. Tribune photo

Despite availability of vaccines, there is a tepid response from the eligible beneficiaries to get inoculated against Covid. It has been learnt that the vaccination drive is yet to pick up pace in the district.

The Patiala Civil Surgeon, Dr Satinder Singh, said, “Earlier, we were vaccinating around 9,000 people everyday even with limited stock. Now, despite having enough vaccine stock the response is not good from beneficiaries.”

There was still vaccine hesitancy among the rural population, which had affected the vaccination drive, he added. Seemingly, in the wake of steep decline in Covid cases, people had become complacent, he said. “We will visit villages and convince residents to get vaccinated. Before the expected third wave, we want to vaccinate as many people as we can,” he added.

However, only four lakh vaccine shots have been administered so far, which is just 30 per cent of the total population in the district.

Meanwhile, Dr Veenu Goyal, district immunisation officer, said, “People must realise that the third wave can only be averted through vaccination. Therefore, they should get vaccinated as soon as possible.”

Despite reducing gap between two shots of Covaxin people reportedly avoid vaccination. Sources in the Health Department said people preferred Covishield over Covaxin due to its worldwide acceptance.

“Although there are some side effects, people prefer Covishield over Covaxin. Those, who want to go abroad, are demanding Covishield,” said a senior health official.