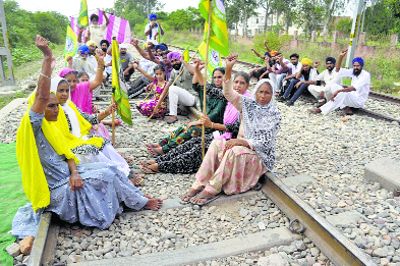 Farmers raise slogans against the Central Government in Patiala on Saturday. Rajesh Sachar

Farmers today blocked railway tracks for the second day after Parliament passed farm Bills. The protest continued till the evening.

The Indian Railways had suspended the train services on September 25 as the farming community observed Punjab bandh in the state.

Meanwhile, farmers were accompanied by women and children who raised slogans against Prime Minister Narendra Modi-led NDA government in the Centre.