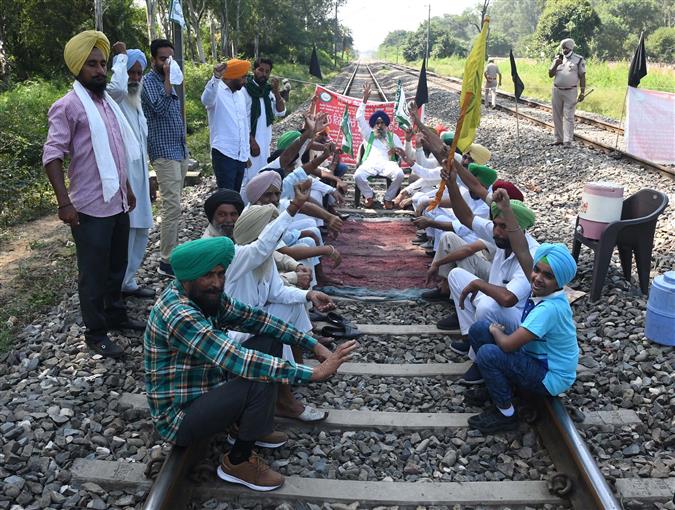 Farmers blocked national highways and railway tracks in the district by holding protests at over 60 sites as part of the Bharat bandh called by the Samyukt Kisan Morcha.

Farmers today blocked national highways and railway tracks in the district by holding protests at over 60 sites as part of the Bharat bandh called by the Samyukt Kisan Morcha.

The protesters staged a sit-in on railways tracks at Dhablan, Kakrala, Shambhu and Daun Kalan villages while roads were blocked at Passiana police station on Chandigarh-Bathinda national highway, Shambhu barrier on Delhi-Amritsar national highway, Dhareri Jattan toll plaza on Patiala-Chadigarh road, Dhabi Gujran toll plaza on Patiala-Patran road, near Kalyan village on Nabha road and at many other places.

Traffic movement was completely hampered on the highways. The roads were opened to traffic at 4 pm.

Many vehicles were stuck on the roads. However, ambulances, doctors and patients were given way.

Manjit Singh, district president, BKU (Ugrahan), said the bandh was successful in the district as people from different spheres supported the call. He said, “The success of today’s bandh has sent a clear message to the Modi government that farmers have support from all walks of life. ”—TNS