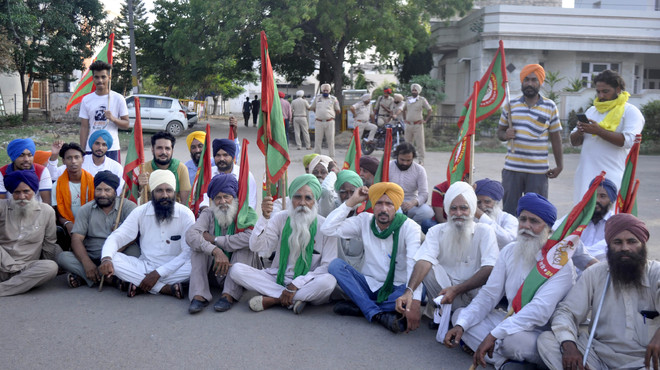 Tension between farmers and BJP leaders in Patiala continues as the former today gheraoed the residence of Harinder Kohli, BJP’s Patiala district president. The BJP leader, however, managed to slip away before the protesters grew in number.

Boycott of only saffron men: SKM

Fatehgarh Sahib: Samyukt Kisan Morcha leader and BKU (Sidhupur) president Jagjit Singh Dalewal on Thursday clarified that the morcha had not given any call to boycott all political leaders in villages, except for BJP leaders. OC

Farmers gathered outside the residence of Kohli alleging a meeting had been organised at the residence. Gurdhian Singh Seuna of the Krantikari Kisan Union, Punjab, said the farmers received information that a meeting was being held at the BJP leader’s residence after which they reached the site. “We will continue holding protests wherever they hold meetings. We will leave the site if and when they leave.”

He added, “We do not have any personal animosity with BJP leaders but the farm laws have affected all. The leaders should raise people’s voice with their high command.” Kohli said no meeting had been organised. “Patiala district (urban) in charge Subhash Verma had paid a visit to my residence. Farmers got to know that someone had come to the house. I don’t know the latest update as I have now come to my relative’s house,” he added. — TNS