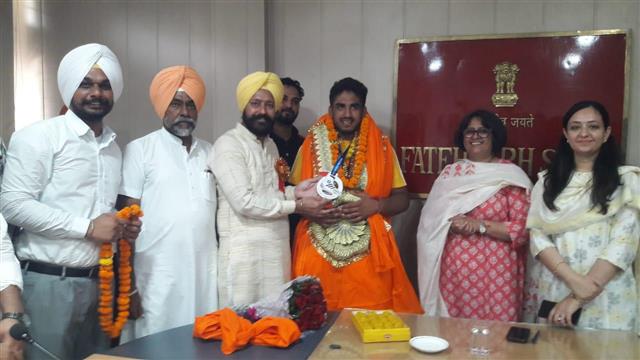 Jaspuran Singh, a resident of Behrampur village, has brought laurels for the district by winning bronze medal in the Sub-junior World Wrestling Championship in the under 17 year 110 kg weight category. The championship was held in Italy (Rome) from July 25 to 31.

Congratulating the wrestler, the Deputy Commissioner asked Jaspuran to prepare for international competitions and Olympics and assured all help from the district administration.

Jaspuran's father Kultar Singh said his son's aim was to win gold medal in the Olympics.

While talking to the media Jaspuran said motivation by his father Kultar Singh, mother Jasbir Kaur and his coach helped him win medal for the country. Jaspuran said he practiced for more than six hours every day.