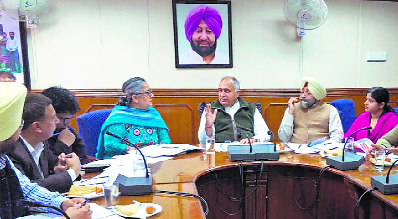 works due to high targets and awaited departmental decisions.

She said the MC has formed a committee to look into the pending arrears of the Punjab State Power Corporation Limited (PSPCL) and the electricity tax amount the local body itself has to pay.

of the Finance and Contract Committee (F&CC) which approved the annual Budget.

She said a decision pertaining to the change of land use (CLU) is pending at the ministry level. “The ministry is yet to take a decision on reduction of the CLU charges. This is why the MC could not collect enough tax as people have been waiting to apply for building application fee expecting that the charges will be reduced.”

Meanwhile, the MC has formed a committee to calculate pending arrears of the PSPCL. The civic body is not paying electricity fee while the PSPCL is not paying the yearly tax amount supposed to be deposited at its office.

The Commissioner said two committees formed by both the departments would look into the pending amounts.

The Finance and Contract Committee (F and CC) approved a Budget of Rs 137.45 crore for the upcoming year. The civic body is expected to fall short of collecting Rs 16 crore in its yearly target this year. It is expected to generate Rs 130 crore.