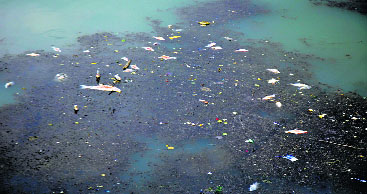 A number of fish have been found dead due to unknown reason at the recently rejuvenated Rajindra Lake here. A Public Works Department (PWD) official stated that the department did not release any fish into the lake but would investigate their death.

A number of fish were seen floating in the lake on Wednesday. Workers deputed at the site by the departments concerned said many fish were removed after they were found died yesterday while more were found afloat today.

Mani, who is deputed at the lake to operate fountains, said, “We removed the dead fish as dogs and other animals ate some of them.”

Kamla, a woman who lives near the lake, adjacent to the Kali Devi temple, said, “A person has been releasing a number of fish into the lake. He did not come for a few days.”

Meanwhile, those residing nearby the place said the lake was not cleaned.

Davinder Singh, Superintending Engineer, Drainage Department, said, “The fountains are being run so that the water does not stagnate.”

Sohan Lal Garg, XEN, PWD, said the department was looking after the management of the lake as it was yet to be handed over to the Municipal Corporation. “The matter of fish dying at the lake has come to our knowledge. We did not release any fish into it but will investigate the cause of their death with the help of experts.” He said the department would also carry out the work of cleaning the lake.