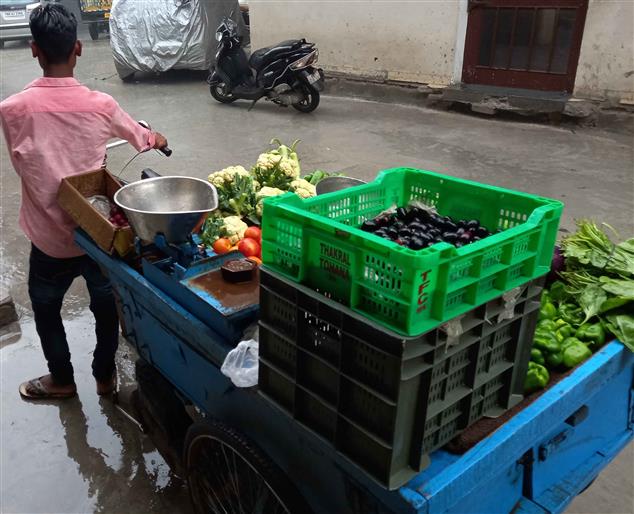 The MC in a survey had identified 3,163 street vendors in Patiala. File photo

Five years after the formation of the Municipal House in January 2018, the Municipal Corporation (MC) has apparently abandoned the city’s street vendor rehabilitation project.

The project is essential to manage the chaos caused by vendors on the city’s roads, but the corporation has merely relocated a few vendors from the sabzi mandi near the Mayor’s residence at Ragho Majra to the office of Mai Ji Di Saran near the Ghalori gate in the past five years.

The project had been hanging fire since 2014. In 2017, the MC issued tenders for preparation of ID cards for carrying out a survey of the number of vendors and other works. The tenders lapsed and the MC carried out a survey and identified 3,163 vendors on its own.

In July 2018, the corporation allotted a tender and gave work orders for preparation of a street vending plan to a private company to identify street vendors and carry out registration.

The project was completed by the company after much delay, but the MC failed to implement it. The MC then included nearly 1,000 vendors on the list of certified vendors.

It then identified 28 vending and other no-vending zones and also prepared ID cards for vendors in 2020, but failed to shift the vendors in an orderly fashion. It also adopted the state’s street vendor policy the same year.

“In five long years, the MC has managed to shift street vendors from only one spot — near the residence of Mayor — to the new site at Ghalori gate in February 2021,” said a resident.

Jagtar Singh, a resident on the Bhadson Road, said: “The vendor rehabilitation project has been pending for years. It is the main cause for traffic chaos. From Bhadson Road to nearby Gurdwara Dukhniwaran Sahib, adjacent to the Sheran Wala Gate and the city bus stand, street vendors can be found at all locations. For years, they have only mushroomed without any accountability. Altogether, the MC has abandoned the project.”

Officials in the MC said they were still facing hiccups over the availability of appropriate space for shifting the vendors. “The number of vendors has already increased since the last survey. We are making efforts to shift the vendors to the designated sites,” said an official.