Many of them posted in Covid wards 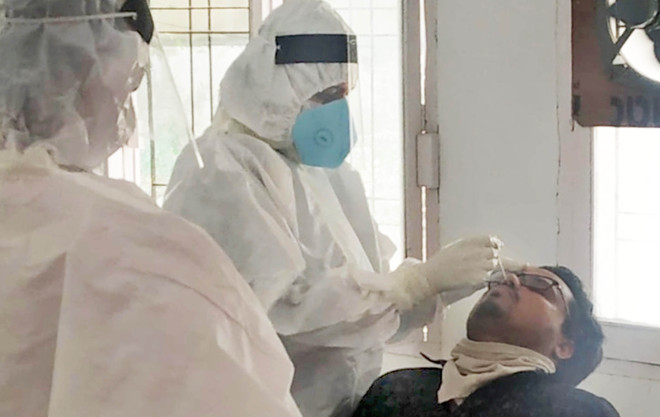 An official takes a swab sample of a man in Patiala. File photo

Violating government rules, some doctors at the Government Rajindra Hospital were allegedly found to be indulging in private practice. In fact, even the doctors who have been performing duties at the Covid ward were found to be practising privately at their homes.

During a fact check by The Tribune, it was found that doctors of the medicine and orthopaedics departments of the hospital were practising at their residences after coming straight from Covid duties. In some cases, the doctors have openly advertised their services outside their homes while some of them disguise themselves behind different clinic names. In another instance, a senior doctor of the orthopaedics department was seen attending the patients at the spouse’s clinic.

Sources said many hospital doctors were even performing surgeries at private hospitals in the city. Besides, some of the doctors were on-call consultants in many private clinics. However, the names of the doctors are not mentioned in the patient’s treatment file.

A retired professor at the Government Medical College (GMC), Patiala, said, “It is an open secret that government doctors indulge in private practice. Sadly, the government has failed to take action against these doctors as they are part of the wider net.”

Surbhi Malik, incharge, Covid ward, Government Rajindra Hospital, said, “As I have been assigned duty for the Covid ward only, I cannot comment on the issue.” Dr Harjinder Singh, Principal, GMC, said, “Private practice is strictly banned by the government. We have been issuing directions regularly to doctors to refrain from such practices. I will take action if anyone is found practising privately.”