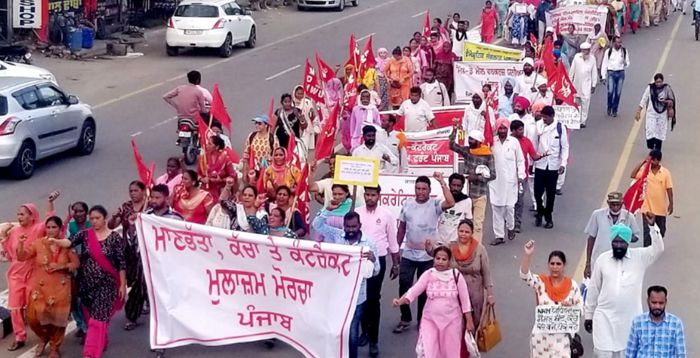 Contractual workers hold a protest against the Punjab Government in support of their demands in Patiala on Sunday. Tribune photo: Rajesh Sachar

After the resignation of Capt Amarinder Singh from the post of Chief Minister, contractual employees working on small honorarium in various government departments on Sunday turned to Punjab Pradesh Congress Committee (PPCC) president Navjot Singh Sidhu and gheraoed his residence. Today was the concluding day of the three-day protest of the employees in Patiala.

The protesters, after holding a march from the PUDA ground to the residence of the PPCC president, staged a sit-in there and raised slogans against the Congress. The protesters had earlier announced to gherao the residence of Capt Amarinder Singh. However, they changed the venue after his resignation yesterday. The protesters said though the Congress had removed Capt Amarinder Singh from the Chief Minister’s post to hide the government’s “failures”, they would continue their protest until their demands were met. The protesters are demanding minimum wages for workers, who have been working on a small honorarium for years. Besides, the protesters are also demanding regularisation of services of the contractual employees.

Vikram Dev, a union leader, said, “Now, Capt Amarinder Singh is not the Chief Minister. Therefore, we decided to hold a protest outside the residence of PPCC president Navjot Singh. The Congress thinks it can divert focus from issues of the state by merely changing the Chief Minister. There is resentment among contractual employees against the Congress and it will reflect in the coming Assembly poll if the government doesn’t fulfil their demands.”

Meanwhile, earlier in the day at the PUDA ground, women protesters, as a mark of protest, mourned the alleged “political death” of Capt Amarinder Singh after his resignation.

The protesters called off the sit-in outside the residence of PPCC president after a written assurance of a meeting with Sidhu on September 24. — TNS