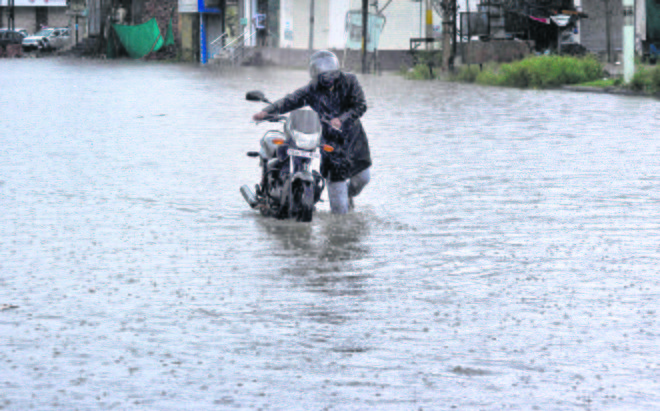 A commuter wades through water after his bike stopped in Patiala on Wednesday. Tribune photo: Rajesh Sachar

Mayor Sanjeev Kumar Sharma’s visit to the Ragho Majra area and other places in the city to check drainage of rainwater during heavy downpour today drew flak as residents questioned the Municipal Corporation’s preparedness to tackle monsoon-related problems.

The areas, including Sewak Colony, Lehal, Chandani Chowk, Nabha Gate and Bagichi Het Ram among others, were inundated for many hours’ today. Though the Municipal Corporation (MC) covered nullah at the Bagichi Het Ram site, it failed to bring any relief to shopkeepers and residents in the area.

A shoe shop owner in the area said this was yearly ordeal. ‘Har saal yahi hota hai. Idhar bahut pareshani hai paani ki,’ he said. (It is the same every year. We face lot of problems due to stagnant water here).

Underground pipes were laid to drain rainwater, but the area still witnessed waterlogging, he added.

“To aggravate problem, the civic body is dumping soil in the nullah at road turn without laying any pipe for draining water. This will definitely create waterlogging,” he said.

Residents of Sewak Colony said, “The Mayor should instead come here and check waterlogging in the area. His visit is a mere photo-op.”

Varun Malhotra, a resident of Malwa Colony, said, “Water did not drain through the sewer lines in our area. Rainwater entered my neighbour’s house.”

Leaders of opposition said Mayor visited areas in the city where there was no waterlogging. He should have checked areas, including Sewak Colony, Chandni Chowk and Khalsa Muhalla among others, where residents’ normal life was disrupted, they added.

Senior Deputy Mayor Yoginder Singh Yogi was on the other hand seen wading through accumulated rainwater in his area. Dairy farmers in the area are known to dump waste in drains in the area. This chokes drains and creates waterlogging issues in the area.

The Municipal Corporation Superintending Engineer, Suresh, said, “It takes about an hour for the rainwater to recede after heavy downpour. Water has been drained in almost all areas of the city after rain.”