House in Patiala's Mohindra Colony damaged during work on drain 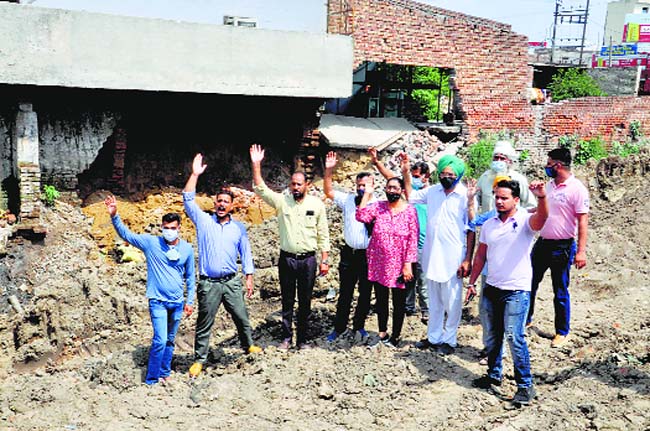 Residents protest after a house was damaged during the work on a drain near Government Mohindra College in Patiala on Tuesday. Tribune photo: Rajesh Sachar

A house adjacent to the eastern peripheral drain was damaged today while channel work was going on.

The owners of the house in Mohindra Colony, near Government Mohindra College, claimed their house had been damaged due to the cleaning process being carried out by the Drainage Department. However, the officials concerned said the house was constructed by encroaching on the property of the department and they had already issued notices to the owners. The officials said the owners were also discharging domestic waste into the drain.

The department had recently issued a number of notices to house owners who had encroached on land adjacent to the drain.

Reacting to the damage caused to the house, the officials of the department said the cleaning of the eastern peripheral drain was going on. “The machines are working at a distance from the house, a wall of which gave way today. In fact, we have already issued notices to the owners of various houses for encroaching on the land of the department adjacent to the drain. Over 40-45 notices have been issued,” said Ramandeep Singh, XEN, Drainage Department.

Municipal Commissioner Poonamdeep Kaur when contacted said, “This is the second incident of a house being damaged on the banks of the drain. While the work is being carried out by the Drainage Department. we have been assisting them as the area falls under our jurisdiction. During a meeting today, a decision was also taken to ensure shuttering behind the houses so that they are not damaged during the work.”