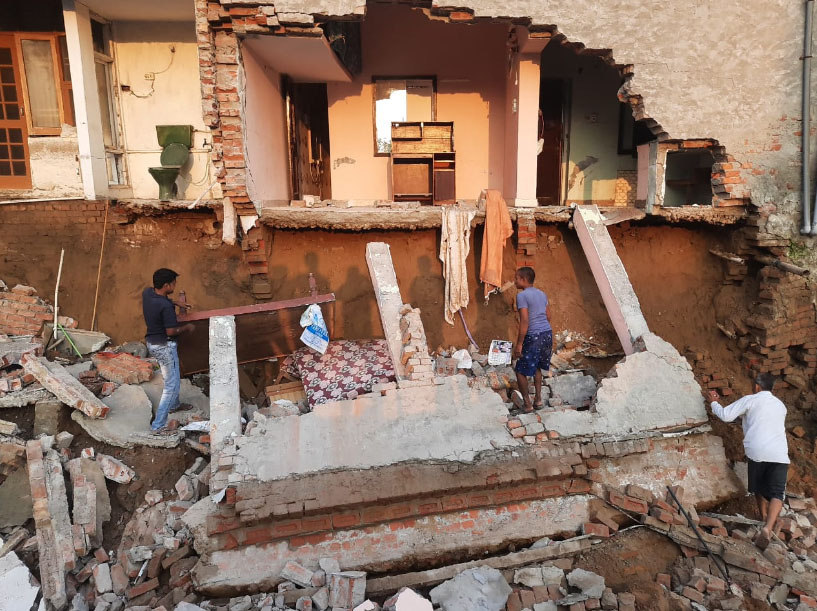 The wall of a house adjacent to a drain at Jyoti Enclave near Government Mohindra College that collapsed on Tuesday night. Tribune photo: Rajesh Sachar

Three houses adjacent to a drain near Government Rajindra College here were damaged allegedly due to the ongoing work of covering the drain being carried out by the Irrigation Department. While the residents have been going pillar-to-post over the matter, officials of the Irrigation Department said no work was being carried out at the site at the time of the incident.

The incident occurred at around 8 pm on Tuesday. Residents of the area said no one was hurt in it though the three houses suffered damage.

Pastor Jacob, who lives in one of the houses, said the incident took place Tuesday late evening. “The back-side wall of the house was damaged along with furniture. Luckily we all escaped unhurt,” he said.

He said the walls collapsed due to ongoing work of covering the drain. “They have been carrying out the work for some time. Earlier also a few houses were damaged. They have dug deep below the foundation of the house,” Jacob said. He said he had met the Mayor over the same but the matter did not come under the ambit of the corporation. It was a holiday today. Therefore, we will meet the Deputy Commissioner tomorrow.

Raghav Garg, SDO, Irrigation Department, said, “The work was not being carried out at the time of the incident. They have carried out constructions of their houses on government land which belongs to the corporation. We are only carrying out the work at the site. We have issued notices to the residents regarding the constructions.”