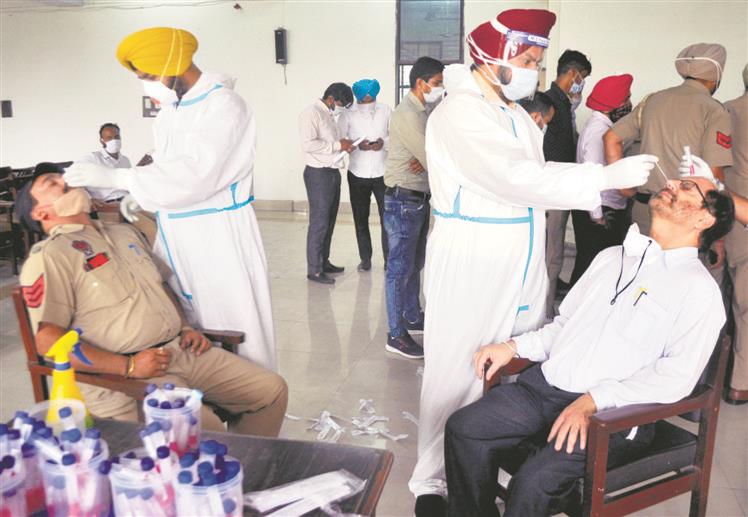 A cop and a man give swab samples for the Covid test during a special drive in Patiala on Wednesday. Tribune photo: Rajesh Sachar

In a highest single day spike, Patiala district today reported 677 Covid cases. With this, the total count of the positive cases in the district has risen to 35,931.

Besides, 19 people succumbed to the virus today, thereby taking the toll to 843 in the district since the onset of the pandemic. Notably, this is the highest single day death count in the district so far.

Of 677 cases, Patiala city reported 442, Rajpura 61, Kauli 44, Kallon Majra and Shutrana 27 cases each. Meanwhile, 21 positive cases were reported from Samana, 13 from Dudhan Sadhan, 10 from Harpalpur and eight from Bhadson.

Concerned over rising Covid cases and deaths in the rural areas, the Health Department said 22 per cent of the active cases in the district were from the hinterland.

The department added that the death count in the rural areas was also higher than the urban areas. Reason was late reporting to hospitals, the department said.

The department claimed that patients from the rural areas were reporting to hospitals only after their health deteriorated to critical level. This made it difficult for doctors to save precious lives, said department officials.

The Patiala Civil Surgeon, Dr Satinder, said, “Late testing and delayed hospitalisation of patients has led to higher fatality in the rural areas as compared to the urban area. Therefore, people should immediately get tested and take treatment.”

Sadly, none of the primary health centres in the rural areas have sufficient infrastructure and manpower to manage positive patients. Only two subdivisional hospitals at Rajpura and Nabha in the entire district are admitting Covid patients.