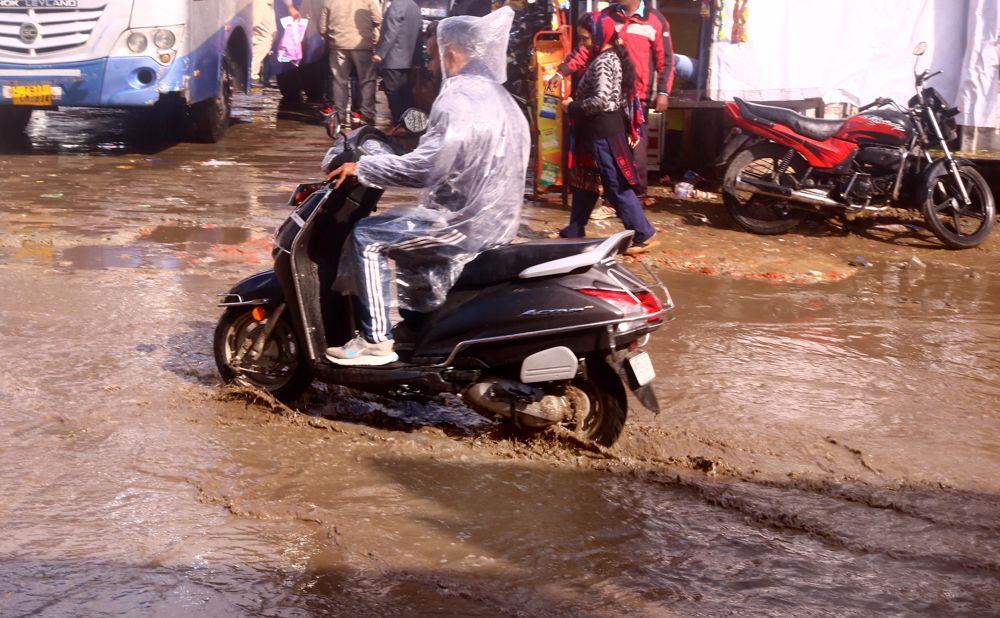 A scooterist rides through a waterlogged road after the rain in Patiala on Sunday. Rajesh Sachar

The district today received 44.7 mm of rainfall and the minimum temperature dropped to 10.8° C. The Indian Meteorological Department said the district remained second to Ludhaina in the state which received 46.2 mm rain. As a result, a number of Patiala city areas, including Pratap Nagar, Police Lines, Dogra Mohalla and Model Town saw acute water-logging. Agriculture officers say the rainfall will be beneficial for the wheat crop but detrimental for vegetables.

The city received incessant rainfall in the evening hours on January 8. It exposed the Municipal Corporation Patiala’s preparedness for the showers, which had recently spent huge funds on nullah cleaning works.

Commuters waged through waterlogged streets in Dogra Mohalla, Model Town, near the office of languages department, among others. The Namdar Khan road also witnessed water-logging despite that the Municipal Corporation officials had ordered respective field staff to take immediate action to clear off stranded rainwater a few days ago.

He said his office had demanded reports regarding loss to vegetables from the field staff. “The vegetable crops, including cauliflower, potato, peas and others have definitely been hit. Therefore we have directed the field staff to provide details of losses generated by farmers. We will take requisite action as per received information,” he said.