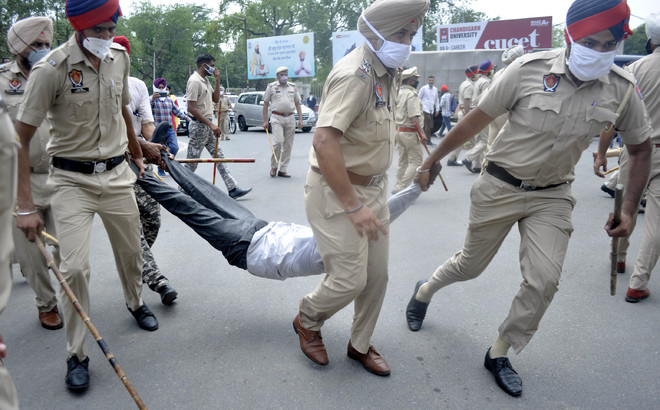 Policemen detain a member of the Berozgar Sanjha Morcha in Patiala on Tuesday. Rajesh Sachar

Members of the Berozgar Sanjha Morcha were detained near the YPS roundabout by the Patiala police when they tried to force their way to the CM residence here today.

The police had to use mild force to disperse the protesters. A minor scuffle broke out between the protesters and police at the YPS roundabout, which is just 100 metres away from the CM residence. The protesters, who were demanding jobs, included Bed-TET pass teachers, multipurpose healthcare workers, DPE teachers, art and craft teachers and PTI teachers. The detained protesters, including women, were taken to different police stations of the district. The protesters claimed many members of the morcha had been injured in police action.

Sukhwinder Singh Dhilwan, leader, Berozgar Sanjha Morcha, said CM Capt Amarinder Singh had promised jobs to them before the 2017 Assembly elections but he failed to keep his word. “The sad part is that they (government) are treating us as if we are criminals. Instead of providing jobs, the government is beating us up with sticks. The police are filing FIRs against us.” Later, they were assured of a meeting with Education Minister Vijay Inder Singla on June 14. — TNS