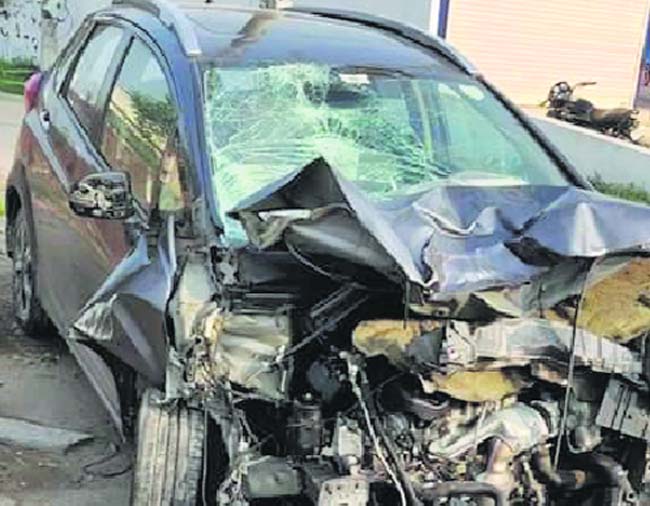 The mangled remains of a car that hit a motorcycle before colliding with an electricity pole on the Sirhind road on Sunday. Rajesh Sachar

Two persons were reportedly killed when a speeding car allegedly hit a motorcycle near a petrol pump on the Patiala-Sirhind road this morning. The car rammed into a utility pole after hitting the bike.

Harry Boparai, SHO, Tripuri, said the deceased had been identified as Manjeet Singh and his 15-year-old son Jasmeet Singh.

The police said a medical test of the suspect, the driver of the car, had been conducted at Government Rajindra Hospital. A post-mortem examination of both deceased had already been conducted and the bodies were handed over to the kin.

The suspect, who has been identified as Karandeep Singh, was arrested from the accident spot itself. A case was registered under Sections 304-A, 279, 337 and 427 of the IPC.

Sources said the accused first hit the motorcycle and then slammed his car into an electricity pole. Eye witnesses alleged that the police — instead of taking care of the victims — were busy in apprehending the accused.

A doctor, who was an eyewitness, said: “The impact of the collision was so severe that the pole was uprooted. It seems the person behind the wheel was driving the car at a very high speed.”

The SHO said the 15-year-old boy was taken to a hospital by the police, but he was declared brought dead. Commenting on the allegations of ignoring the victims and protecting the accused, the SHO said it was important to save the accused from mob attack. So, the police team rescued the suspect from the spot.