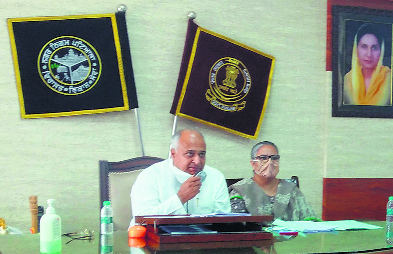 Claiming that the decision will bring financial benefit to the Municipal Corporation, the general House today approved the road behind Columbia Asia Hospital as a commercial area.

The out-of-agenda matter was proposed by councillor Vijay Kumar who claimed more than half the area along the road behind the hospital which has already been converted into a commercial area. The MC had earlier also declared a number of pockets of the city as commercial hubs on the pretext that people had raised commercial properties there, which has exposed the inability of the building branch to keep a check on illegal constructions across the city.

Responding to it, Mayor Sanjeev Kumar Sharma said the matter had been passed by the House and will be implemented only after the government’s approval.

The House meeting was held through videoconferencing. The MC will purchase another 40 smart semi-underground garbage bins for the city. Around 21 bins were purchased earlier. Officials said there were various areas where residents continued to dump waste on roads and in vacant plots. The Mayor said the designated points for the bins had been identified. The MC will also buy mechanical sweeping machines for Rs6.17 crore which will be run for five years.

The House also gave its approval to the second phase of construction and development of the dairy farm scheme at Ablowal village. The work of phase I is underway. The MC will carry out the works pertaining to the construction of a veterinary dispensary, cowshed, cow-dung storage shed and others at a vetted cost of Rs10 crore.

The MC will now pay contractors over Rs1 crore more than the previously decided rate for the bio-remediation of the dump on the Sanour road as per technical directions of the local Government Department. The Mayor said: “We have also included the Urban Estate area and 40 colonies in the multi-crore water supply project. The approval was given today. This will help provide the residents of these colonies with clean drinking water from the canal.”