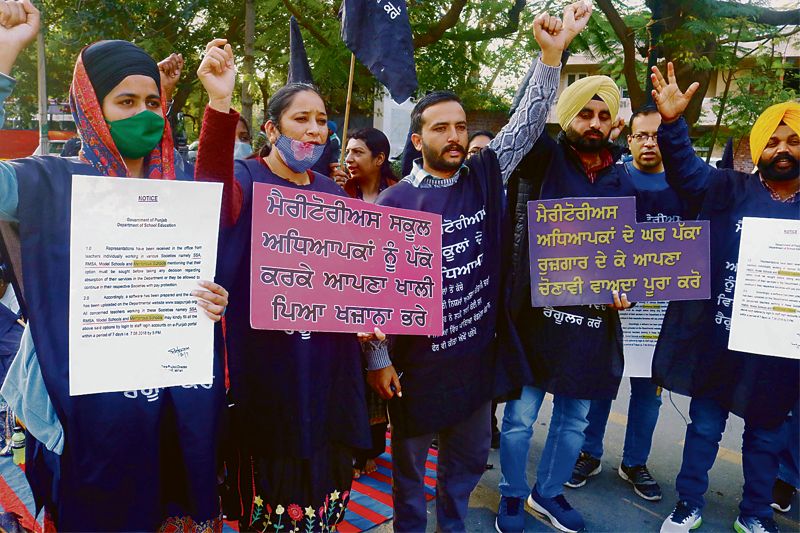 Members of the Meritorious Schools Teachers Union protest in support of their demands in Patiala on Wednesday. Rajesh Sachar

Teachers of the meritorious schools reached the residence of Navjot Singh Sidhu with their demand of regularisation wearing black overalls. The protesters said they had met the PPCC chief twice over the matter of regularisation of jobs but the issue was not settled.

They said, “The PPCC chief and the new state government has stated that they will resolve the pending matters of teaching fraternity and employees of the health services at the earliest but the same has not been resolved yet.”

They said over 10 meritorious schools were opened in the state for children of middle class and poor families. “Over 260 teachers, including M.Phil, UGC net cleared and PhD individuals are working in the schools on contract,” the protesters said.

They said the state government had regularised the jobs of SSA/ RMSA teachers in 2018 but teachers of meritorious schools were left out.

The teachers were assured a meeting on December 10 with Navjot Singh Sidhu after which the protest was lifted for the day.

Meanwhile, teachers associated with the NSQF Teachers Union during their protest outside the residence of the PPCC chief said they had been holding protests for the past six months and had held over 23 meetings with officials of the state government but had received formal assurances.

State president Rai Sahib Singh Sidhu said they would sit on hunger strike outside the office of Chief Minister Charanjit Singh Channi if their matter was not taken up during the upcoming Cabinet meeting on December 9.