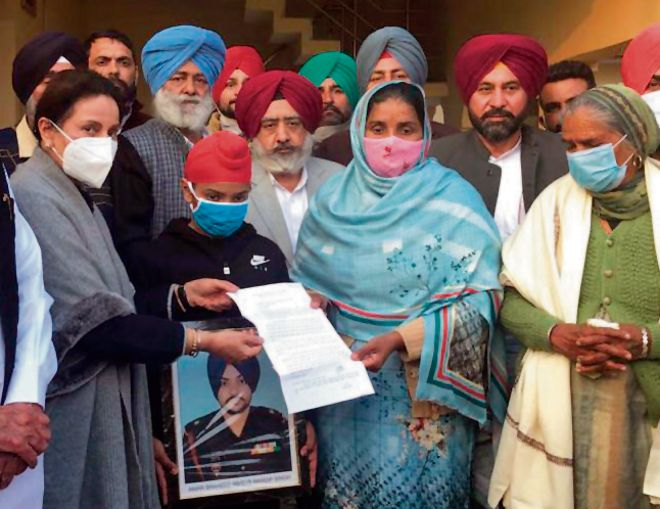 The Lok Sabha member, Preneet Kaur, today handed over an appointment letter to Gurdeep Kaur, wife of Naib Subedar Mandeep Singh Kharaur of Seel village, who had attained martyrdom in June last year while fighting with the Chinese troops in the Galwan Valley.

Preneet, who was accompanied by Ghanaur MLA Madan Lal Jalalpur, said, "Shaheed Mandeep Singh has made Punjab in general and Patiala in particular proud by sacrificing his life for the country. Chief Minister Capt Amarinder Singh has already named the Ghanaur road from Bahadurgarh as 'Shaheed Naib Subedar Mandeep Singh Marg' to perpetuate his heroic deed. His wife has been given the job of inspector in the Department of Cooperation."

Preneet assured that in future too, she and the Chief Minister would standby the family of Shaheed Mandeep Singh through thick and thin.

Shaheed Naib Subedar Mandeep Singh Kharaur was posted as Gunner Instructor (AIG) at 3 Artillery Medium Unit of the Indian Army in Leh Ladakh Nimo. He was killed on the night of June 15, 2020, while fighting with the Chinese troops in the Galwan Valley.