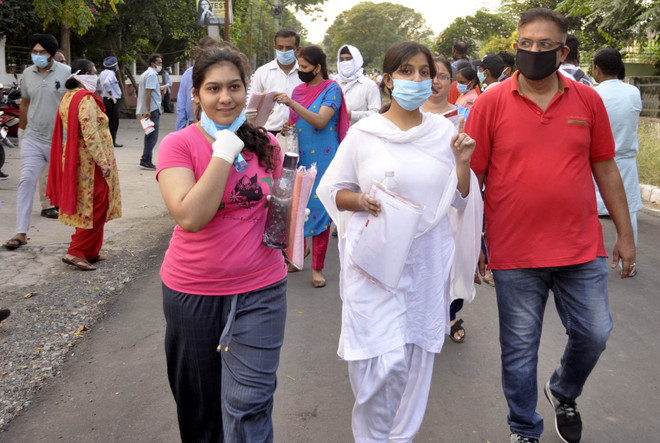 Students come out of an examination centre in Patiala on Sunday. Tribune photo: Rajesh Sachar

The identification of NEET exam centres by the National Testing Agency came under attack as parents questioned the agency’s decision to conduct the exam at a far-flung centre. “While all government schools, colleges and universities in the district were available to be used for the purpose as they were closed due to the pandemic, the testing agency identified this particular school in a far-off village,” RPS Malhotra, parent of a candidate, said.

Parents said the access road to the centre, Shri Guru Tegh Bahadur Public School at Behar Sahib village, was in a bad shape. “The approach to the area was inconvenient. Most people got confused with the school in Patran town, which goes by the same name, and reached here in the nick of time. Villagers had to ferry students on their two-wheelers for them to make it to the centre on time,” Jagjit Singh, a parent, said.

Parents said there was lack of management at the centre where people failed to maintain social distancing. The agency had identified two schools in Rajpura, one in Patiala city and one in Patran for the exam. The police said they made sure students faced no issues with the traffic. Palwinder Cheema, SP, Traffic, said, “The police made sure there was no traffic chaos. I have received reports on the matter from Patran DSP and Shutrana SHO.”

Vishal, co-ordinator for the exam, said they had a list of 2,490 students taking the exam. “The centres are finalised by the National Testing Agency,” he added.

Problems in Ludhiana too