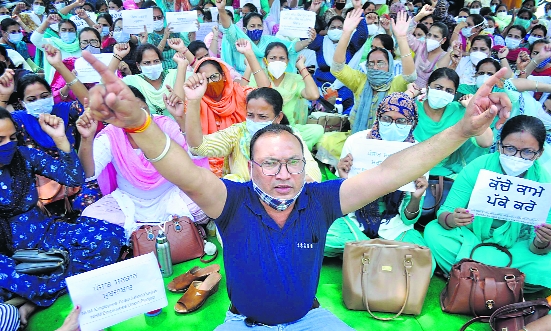 Demanding regular jobs, hundreds of frontline workers, employed under the National Health Mission (NHM), Punjab, held a protest at the Civil Surgeon’s office today. The protesters raised slogans against the Punjab Chief Minister for failing to give them regular job.

The protesters also took out a march in the city. They blocked traffic at the bus stand roundabout for a while before they were dispersed by the police.

Simranjeet Kaur, a protester, said they were being paid very less compared to regular employees doing the same job. “When it comes to awards, the minister took the credit and ignored our efforts during the pandemic. It is high time that the government should recognise our efforts and put us on regular service.”

The frontline workers said they would boycott vaccination drive from May 1.

Amarjeet Singh, union leader, said: “Many employees are already on the verge of retirement. It is unfortunate that the government did not regularise them. It is injustice towards thousands of NHM workers who have been working overtime during the pandemic on such low wages.”

Vaccination and sampling were affected at some places due to their protest.