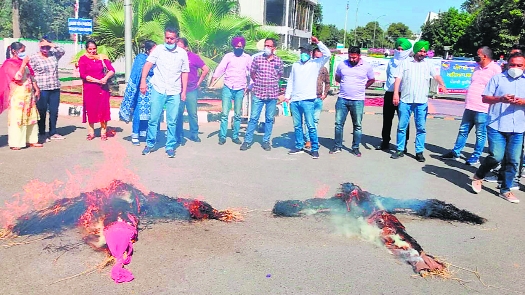 Punjabi University employees, along with PUTA members, protest in support of their demands in Patiala on Friday. Rajesh Sachar

A day after Punjabi University acting Vice-Chancellor (VC) Ravneet Kaur allocated the charge of the Registrar’s office to Prof Varinder Kumar Kaushik, teaching and non-teaching officials today burned an effigy of the VC and the newly appointed Registrar on the campus.

Teaching officials said the protest being carried out by the teaching and non-teaching fraternity would continue in the same manner.

Class-A, B and C officials of the university said the administrative officials were delaying their demands. They said the state government should appoint the new VC at the earliest.

The association leaders said they were stern on their demands — issuing of promotion letters to staff, increment in salary of employees on an ad hoc and work charge basis, promoting ad hoc workers to regular basis and others.