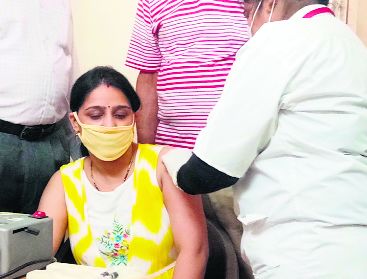 A health worker administers the Covid vaccine to a woman in Patiala on Sunday. Tribune photo: Rajesh Sachar

Despite the government’s best efforts, only 27 per cent of the target population in the district has been fully vaccinated to date. Of a target population of 14 lakh, around 3.75 lakh beneficiaries have received both doses of the Covid-19 vaccine. Besides, not even a single village in the district has been declared fully vaccinated, despite several special efforts to cover the rural population.

The Health Department, however, said that around 10. 22 lakh (73 percent) beneficiaries had received their first dose in the district. The district health authorities on Sunday administered 1,536 doses of Covid vaccine.

He also admitted that people had become complacent about the virus, in the face of the minimal daily positive cases in the district. He said, “People due to festival season are not coming forward for vaccination. We are expecting that number will increase once the festival season is over.”

When asked about poor vaccination in rural areas, Sodhi said that the Health Department had recently held a meeting with the district administration wherein it was decided that officials of the Department of Rural Development and Panchayat and other departments would mobilise people for the vaccination. He said, “We have already made a strategy to cover a maximum population in the rural areas. We have already given vaccination targets to doctors in villages.”